The Sacred Era by Yoshio Aramaki 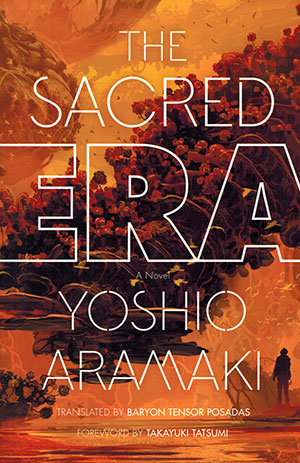 Surrealist art, post-Christian dogma, reincarnation, and spaceships fueled by human consciousness: these are just some of the elements that make up the complex panorama of Yoshio Aramaki’s exquisite work of speculative fiction. In fact, one could safely say that The Sacred Era, a masterpiece of the New Wave movement in science fiction (1960s and ’70s), is so ambitious and unfettered that you won’t read many books like it.

Set in a distant future in which a powerful Christian-esque “Holy Empire” dominates part of the planet, The Sacred Era follows a young student named “K” (think Kafka’s The Trial ) as he journeys to the capital to take the Sacred Service Examination and become part of the Papal Court’s massive metaphysical research bureaucracy. With no clear past and no understanding of his future work, K miraculously passes the exam and is ordered to research the mythical Planet Bosch, a plant-planet thought to have migrated long ago from Earth’s neighborhood to a point a thousand light-years away. Bound up in the mystery and rumor that surround discussions of the planet are complicated prophetic religious texts that, like the Christianity of what the characters call the “Twilight Era” (our era), speculate about the nature of the relationship among humans, the cosmos, and God. This post-Christian Holy Empire of Igitur blends together Christian and Buddhist beliefs about resurrection and reincarnation, which in turn hold the key to Planet Bosch’s existence.

Aramaki thus turns Hieronymous Bosch’s early-Renaissance triptych The Garden of Earthly Delights—itself a meditation on creation, good and evil, and sin—into a literal Garden of Eden planet where “life” and “death” are meaningless terms and dissolution-and-rebirth the very essence. Reminiscent of 2001: A Space Odyssey in its investigation of humanity’s development at the nexus of spirituality and scientific discovery, The Sacred Era weaves together dreams, human technology, wandering planets, evolution, consciousness, and prophecy to imagine one potential answer to the very meaning of the universe(s).

Nothing is superfluous in this novel: each word of Posada’s translation from the Japanese has weight, and each page betrays the almost ecstatic extravagance of Aramaki’s unbridled imagination. The Sacred Era is truly a masterpiece.