Miłosz: A Biography by Andrzej Franaszek 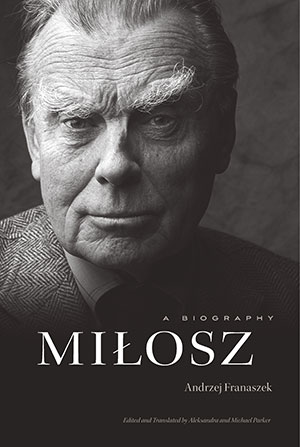 The first comprehensive biography of the Nobel Prize–winning Polish poet Czesław Miłosz was published in Kraków in 2011. Its author, Andrzej Franaszek, completed a Herculean task, digging into Polish and American archives, reading his way through a massive amount of correspondence, not to mention critical assessment of Miłosz’s published and unpublished writing. The decision of the Belknap Press to bring out an abridged version of Franaszek’s biography is most welcome: in that (in the opinion of this reviewer) Miłosz is one of the greatest poets of the twentieth century, this volume will remain a major source for any serious student of European (and also American) poetry of this period.

Miłosz was born in Szetejnie, Lithuania, in 1911 and lived most of his life abroad. That life was characterized by constant change as he was tossed about by political and personal challenges and circumstances. A left-leaning young man in a nationalistic, semimilitarized Poland, he served as cultural attaché of the new (Communist) Poland in the US after World War II until his defection from his increasingly Stalinist country in 1951. It was this decision, though initially causing much hardship, and the book that came out of it, The Captive Mind, which paved his further career; without it and other prose works he wrote in the 1950s, Miłosz would have never received an invitation to teach at the University of California nine years later. As for the Noble Prize in Literature in 1980, that was only the crowning moment of his ever-widening recognition in the English-speaking world.

Franaszek’s biography rightly concentrates on the forces that shaped Miłosz’s poetic development. He is trying to show not only the literary figure but also the private, often desperately neurotic man “with warts and all.” The role of women is stressed, starting with the poet’s closeness to his “strong” mother, Weronika Kunat, and to his first wife, Janka, without whom (as well as other women: his intellectual partner and sometime lover Jeanne Hersch, the “Ewa” of the 1981–84 period; and his second wife, Carol) Miłosz’s life would have been different. Franaszek also devotes much space to the influence of older men (father substitutes?), such as the poet Jarosław Iwaszkiewicz, the Lithuanian-leaning and francophile mystic poet Oskar Miłosz, the Hegelian Tadeusz Kroński, and, last but not least, the wise Stanisław Vincenz.

One of Miłosz’s central problems is his constant grappling with history. In the beginning, he accepts that Marxist “historical necessity” is superior to individual lives, but as Franaszek illustrates, after his defection to the circle around the émigré magazine Kultura (an island of sanity in the sea of hostile Polish right-wing émigrés and pro-Communist French intellectuals), he undergoes a huge existential crisis exacerbated by the absence of his wife and children left behind in America. Once the family is reunited and serious political changes take place in Poland (1956), Miłosz recovers his balance and manages to write much good poetry once again; getting a chair at Berkeley substantially improves his self-confidence. Incidentally, in this biography there is insufficient information about the four decades that Miłosz spent teaching at Berkeley; it can also be said that the poet’s growing recognition in America is not documented thoroughly. For example, while Miłosz winning the Neustadt Prize in 1978 is described as “highly prestigious,” the following special issue of World Literature Today (Summer 1978) devoted to his work is left unmentioned, and the name of Ivar Ivask, the editor of this already then-influential periodical, is also missing.

Translating and editing Franaszek’s voluminous biography—a truly difficult task—was undertaken by Aleksandra and Michael Parker. They had to cut 755 pages of the original text to a mere 470 pages to tailor to the needs of the Anglo-American reader. Most of the cuts can be justified, but it is regrettable that, for example, the full text of the short poem “Obłoki,” referred to by the translators simply as “wonderful,” is omitted. While editing, various errors crept into the English version, just to mention one: on page 378, two dates are mixed up and a quotation from a letter by Miłosz to Jerzy Giedroyc about Poles in the US (October 30, 1970) is wrongly attributed to a letter to Marek Skwarnicki in 1964.

The Polish original of the Miłosz biography contained perhaps too many notes, 165 pages of small type, but here the editors of the English version took a drastic decision, cutting down the notes to a mere six pages. Instead of background information and references to source material, the Parkers decided to stick to general notes. Unfortunately, even these six pages contain information that is either insufficient or misleading: Bolesław Leśmian was not a member of the Skamander group, the note on Chochoł makes no sense without reference to Wyspiański’s play The Wedding, and, finally, the student march in Budapest on October 23, 1956, that led to the uprising had quite different aims than just “commemorating the Hungarian revolt of 1848” against the Austrians, who at the time ruled but had not “occupied” Hungary.