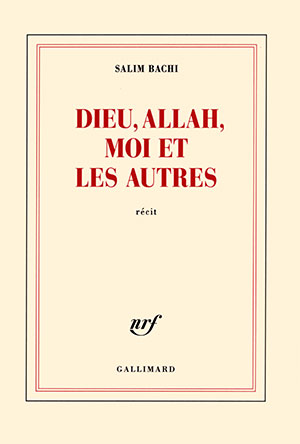 “God doesn’t exist. Phew! I said it.” This profession of lack of faith is found early in Salim Bachi’s latest work, which combines autobiographical narrative with reflections on the current state of his native Algeria. Bachi, who now lives in France, is known for, among other novels, Le chien d’Ulysse (2001), Le Silence de Mahomet (2008), and Le Consul (2014). His struggles with the dogmatic religion that was literally beaten into him as a schoolchild constitute the leitmotif of “God, Allah, me, and the others.”

In order to free himself from the rigid, constraining sense of identity that was imposed upon him, the young Bachi had to distance himself progressively from the “hell and damnation” of his religious indoctrination. He also had to leave his native land, which was ravaged by the civil war of the 1990s, in many ways a staging ground for the slaughter and devastation that religious fanaticism would soon spread to other parts of the world. Born in 1971, Bachi came of age when the civil war started. He describes at length the vicious corporal punishment that was routinely meted out in Algerian schools as well as the war’s ravages on many of the young men of his generation: “Most are dead or were driven insane.” A sickly child who was unable to participate in sports and outdoor activities, Bachi found refuge in books. His taste for literature led to advanced studies in France and Italy and to a career as a novelist.

This book’s nonlinear narration alternates between memories of youth in Algeria and of adulthood in France, with frequent trips or lengthy stays elsewhere, including in Ireland and Syria. The usual autobiographical elements are present: Bachi describes living in small Parisian apartments during his student years as well as his love life and his development as an author. Bachi also engages in a sort of dialogue with Albert Camus (1913–60), another child of Algeria who loved his native land but could not survive there. Some of the most moving moments of Bachi’s book are found in the descriptions of his trips back to Algeria, in order to visit his family: “There is nothing left of the Casbah where my father was born, nor of Belcourt where he grew up: many of the working-class neighborhoods that were neglected for half a century now resemble bombed-out ruins.”

Bachi often points out that the main mission of a writer is to bear witness, something he does clearly, honestly, and eloquently in his latest work.