The Doll by Ismail Kadare 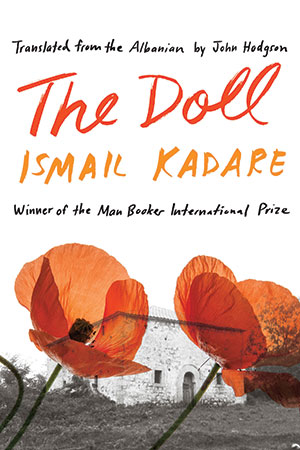 OPENING WITH THE DEATH of Kadare’s mother (the “doll” of the title) in 1994, rewinding to her marriage in 1933, then moving forward till 1999, the latest work from the 2020 Neustadt Prize honoree shows how the limits imposed by Albania’s traditional class and gender rules and repressive governments affect the Kadare family. The doll its apparent subject, this slim, semi-autobiographical novel highlights the artist’s fraught bonds with his mother and his country. But on a deeper level, it becomes a matryoshka doll containing Kadare’s mother, grandmother, motherland, and “mother” as trope—all riddles that the “I” narrator, Kadare’s persona, attempts to resolve, an effort that propels his artistic growth.

Kadare’s ancestral home embodies Albania’s isolation, confining and stifling the doll. Marrying at seventeen, she exchanges a colorful cosmopolitan house for her husband’s grim abode, its hidden passages and prison evoke Albania’s medieval past. According to custom, her stern mother-in-law maintains control and never leaves its stony walls. Unable to mature, the doll feels the house is eating her up.

Naïve, strange, often distant, Kadare’s mother constitutes a puzzle that moves him to ponder what “mother” means. Initially, he describes her as a “paper doll,” fragile and inscrutable, frozen behind a white mask that conjures Kabuki performers. The novel records his failed attempts to penetrate it. Then he recalls that Andrei Voznesensky linked the Russian mat (mother) and tma (darkness), finding in mother/darkness an image of the passage from birth to death. Kadare’s repeated allusions to this pairing renders “mother” an eerie presence that haunts the text.

Ultimately, Kadare connects “mother” to motherland and mother/darkness. As the young artist gains fame, the doll tells him her fears that he will trade her for some more appropriate mother. In 1992, as he visits Albania from his self-exile in France (he fled in 1989), she asks, “Are you a Frenchman now?” Returning to post-Communist Albania in 1999, five years after her death, Kadare remembers her words “about the replacement of a mother, though now articulated in . . . ‘Mother France’ or ‘Mother Albania.’” Juxtaposing mother and country, he captures the complex relations that fostered his lifelong attempt to understand both. The doll, white in her coffin, giving “her greatest performance,” conjures “that matter of the darkness from which we all emerge. Or the other one, the darkness to which we are all going.” The dead doll incarnates the mystery of existence.

Like most Kadare works, The Doll ends in enigma. During the abovementioned trip, Kadare journeys to his family home, rebuilt after having burned down. When men in folk dress intone a traditional song, a prayer that the bride who enters the house stay forever, he recoils from this vestige of old Albania. Sensing the house’s “pointless spite,” yearning to escape its power, he wishes he knew the location of its “secret door,” then utters his final words: “the feeling that overcame me was nothing other than a continuation of the perplexity of long ago.” Albania, the doll, mother/darkness—all remain shrouded in fog.