The Book of Cairo: A City in Short Fiction 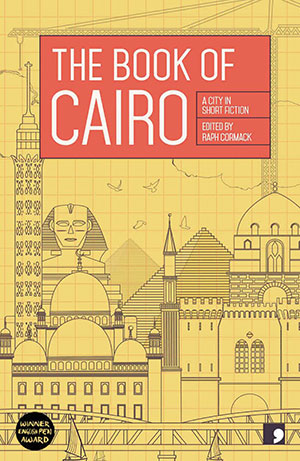 It is not often that Western audiences have the opportunity to delve into an anthology of contemporary Egyptian fiction; a book that transports them out of their comfort zones and into the bustling streets of downtown Cairo, where police officers go on murderous rampages, disgraced doctors become detectives, and women confess their love to masked strangers in video-rental shops. And yet, somehow that is exactly what Comma Press was able to achieve with The Book of Cairo.

Featuring stories by ten of Egypt’s finest writers and novelists, including Ahmed Naji, Hatem Hafez, and Eman Abdelrahim, The Book of Cairo is the latest entry in Comma Press’s A City in Short Fiction series. The slim book acts as a smorgasbord of Egyptian storytelling in the aftermath of the failed 2011 Arab Spring uprising—a scattered look inside the complexity of the ancient city and the traumatized humans inhabiting it. There are stories about love and loss endured by hashish dealers, perpetual misery in the form of endless traffic, and female oppression in the form of visa denials and cannibalism fetishes. There is a little something for everyone.

The Book of Cairo is edited and introduced by Raph Cormack, a translator, editor, and author with a PhD in modern Arabic literature. Through his selected stories and their strategic positioning in the table of contents, Cormack curates an impressive snapshot of Cairene life with all its laughter and misery. From the opening page of the first story, “Gridlock,” we follow a packed microbus into traffic and get a sense of modern-day life in the Egyptian capital, including hash joints made up of henna and aspirin, an engineer with no engineering background, and a street sweeper anxious about the costs associated with marrying off his daughter. The author takes a casual, almost breezy approach to the storytelling, seemingly unaware of the rising tension. Yet it remains quintessentially Egyptian—a story relatable to anyone who has endured a morning in Cairo’s hellish traffic.

One of the finest achievements in The Book of Cairo was “Siniora,” by Ahmed Naji, the Egyptian novelist who was jailed in 2015 for “violating public morality” with the sexual content and drug references in his novel Using Life. Naji’s contribution to the anthology begins with the line “I must have been as crazy for her c*** as I was for the internet” and holds you spellbound for the remainder of the eleven-page entry. It is a story about love, lust, and isolation; about a couple who discovered their talents for producing hashish and sexual gratification. There is a Kafkaesque feel to the story—a sense of irreverence and pseudoreality that makes the story remarkably endearing.

In conclusion, The Book of Cairo is a successful attempt to capture the essence of Egyptian storytelling in the wake of mass social change and shared trauma. It is varied and wide-ranging, filled with stories of horror, humor, and the empty spaces between. It is both strange and entirely ordinary, and yet still entirely Egyptian.