From There to Here: Selected Poems and Translations by Ciaran Carson 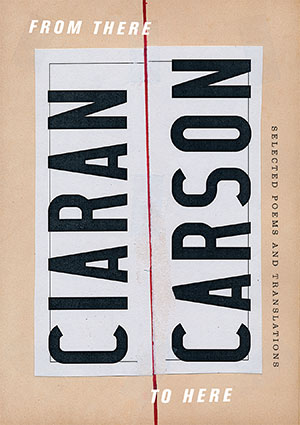 For those readers somehow unfamiliar with Ciaran Carson’s poetry, these selected poems, chosen from thirteen books and presented in chronological order from 1976 to 2014, will provide an almost dizzyingly fast-paced tour of his essential work. More than any other poet in recent times, Carson’s poetic style changes dramatically from one phase of creativity to another. Were it not for certain consistencies in voice and topic, one could even wonder if all these poems were written by the same poet, so dramatic are the formal evolutions encountered in rapid succession. From beginning to end, however, Carson’s preferred method of conveying stance and “meaning” is consistent, using gesture and suggestion rather than declaration, achieving resonance through careful description and scrupulous diction.

In his earliest books, Carson (1948–2019) writes poems detailing the Troubles in Belfast. Without taking any particular overt stance on the conflict other than that implied by his focus, he uses a language of partial disclosure to evoke the psychology of that time, narratives that carefully allow the readers in while keeping them out with a certain level of secrecy and evasion. The language could be that of the hushed, clipped language of IRA soldiers huddled together in an English bar. For example, consider these lines from “Last Orders”: “Squeeze the buzzer on the steel mesh gate like a trigger, but / It’s someone else who has you in their sights. Click. It opens . . . / . . . The barman lolls his head at us. We order Harp— / Seems safe enough, everybody drinks it. As someone looks daggers at us / From the Bushmills mirror, a penny drops: how easy it would be for someone / Like ourselves to walk in and blow the whole place, and ourselves, to Kingdom Come.” Typical of this period also is the use of irony and grim humor as in the title and first lines of “Belfast Confetti”: “Suddenly as the riot squad moved in it was raining exclamation marks, / Nuts, bolts, nails, car keys. A fount of broken type. And the explosion / Itself.” Such long—almost prosaic—lines that confront the right margin of the page characterize this period.

Then, in 1993, with the book First Language and on through the next five books afterward, we encounter a major shift in formal concern. In these books, the lines are still long, but language itself is the main concern. Most poems are cast in fourteeners or alexandrine lines with dazzling invention and wit. Though he is often compared to Paul Muldoon, we also hear strong strains of Byron, James Merrill, and John Ashbery. Ordinary topics and titular notions are lathered up in such a celebration of language that the reader may often lose sight of what actually is being described. This need not be a criticism: this is a style of writing, a Mardi Gras of things and sounds, a parti-colored confetti of vowel and consonant sounds that revel in the physicality of language and the boundless association of thought. These poems are dances of the tongue, dances of the mind.

A couple of examples will illustrate these qualities. In “The Ballad of HMS Belfast,” we read: “The dolphin and the flying fish would chaperone us like aquatic aunties // In their second, mermaid childhood, till we ourselves felt neither fish nor flesh, but / Breathed through gills of rum and brandy. We’d flounder on the randy decks like halibut.” In the poem “Juliet,” we read: “I bought a bunch of thyme. He bought rue. Our hands touched. I was contagious to a Montague, / And the grand piazza was pizzaz with heraldry emblazoned in a rendezvous / Of factions: oriflammes and banderoles, standards, swallowtails and bannerettes, / All fluttering with shamrocks, roses, thistles high above the parapets // Where guzzling trumpeters tilted trumpets to their lips like bottles full of Coke // Or dope-imbibers gazing at the ceiling, relishing their skywriting smoke.”

After six books characterized by this style of writing, readers may be shocked to encounter the poems of On the Night Watch (2009), short, thin ribbons of print descending the page with lines of often no more than one to three words; monosyllabic, minimalist poems that are lean, muscular, terse. Typical of this phase is the poem “Singled By,” here in its entirety: “the eye and / taken up by // itself it was / shining white // but taken with / sky // a strong hard / blue as before // a remembrance / of other clouds.” This is desert fare compared to the opulence of his earlier work, and it requires a different response from its readers. It’s as if Carson tired of the fancy footwork of demonstrative poetry and sought the relative quietude of spare utterance.

Often praised (rightly) for his treatment of the conflict in Northern Ireland as well as his unflinching, honest descriptions of war, especially of the corpse-strewn scenes on the “Field of Honor,” Carson is not praised enough for the courage of his formal range, his willingness to explore new territory and recast himself instead of falling into a “settled” approach to poetic expression. While some readers may find his formal extremes excessive, he at least was willing to push the limits not only of his capabilities but of the language itself.