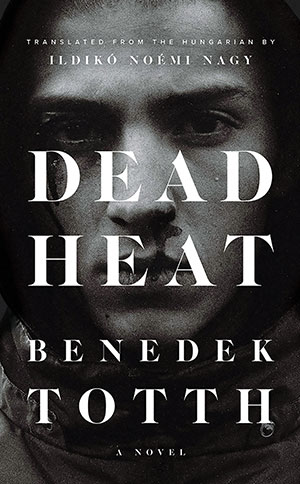 The characters in Dead Heat, the debut novel by Hungarian author Benedek Totth, are absolute monsters. They are cruel in word and deed, and when they are not being cruel, they are themselves the recipients of cruelty. The novel is a rat king of banal meanness rendered in stark, simple sentences that begin to take on a de Sade-ian “listicle” quality that overwhelms and affects and just as quickly disappears.

We follow members of an elite high school swim team. They’re rich kids, most of them, and if they’re not rich, their friend and leader Ducky is. They smoke weed and drink and drive and run over homeless people. They feel a little guilty but mostly they just keep going. They urinate on sauna rocks and molest girls through their clothes and then toss them off to the side. This continues for several hundred pages.

If it sounds like I’m moralizing, well, I might be. I personally enjoy mean art, art that pulls no punches, that is visceral and angry. I also like books that contain ideas, innovation, something new. If it’s got to be ugly on the way to being brilliant, I am all for it. But what exactly is this novel saying? That the youth of today are disaffected, violent, angry, horny, sad? I have the internet. I can go to Twitter any time I open up my phone and see that. While reading a book like this, I’m left wondering, “Okay . . . so?” We’ve had books like this for almost a hundred years now, books precisely like this, and I’m sure the general gist can be traced back further.

For all my complaining, however, the book has great moments. Take this passage from late in the novel, while the narrator is observing a young boy bullying a young girl (see what’s going here?). He is commenting on his ennui: “It feels like none of it ever happened, or like it didn’t happen to us, or even if it did happen to us then definitely in some former life. A Buddhist said that one time on TV. I mean this whole former life thing. But he didn’t say anything about if you’re in your real life now, or still in your former one.”

That’s lovely. And as the book progresses and the kids begin to turn on each other, I’d be lying if I said I didn’t become absorbed. Credit where credit is due.

At the end of the day, it could be that I simply didn’t find the book very funny. There might be something lost in translation; I can’t be sure. Satire like this, if that’s what this is, at least has to be amusing. The extremity of the book, which in itself is cartoonish, is balanced with a straightforward style that continually serves up antipunchlines. A lot of the book feels gray, inert. Like it’s a person stuck in a former life, wandering the bardo, waiting for a boar to come along and shake things up (it’ll make sense when you read the book). The prose feels disconnected. Like the characters. I get it.

If I can say something polite to end this review, it is that Totth is committed to the bit. He does not blink. It’s a characteristic that I admire in a writer. He puts down, plainly and relentlessly, this story of cruel children being cruel, and he doesn’t sugarcoat it. But what is the opposite of sugarcoating? What is it called when someone can’t let off the gas? What are we being forced to stare at, exactly?