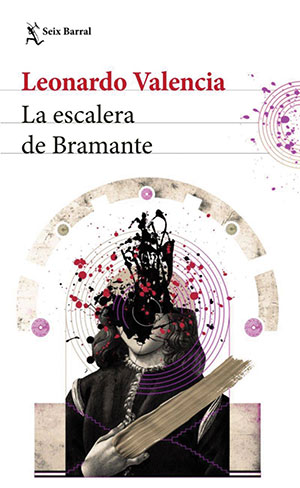 Much ink is spent on bidding the Great Latin American Novel, speciously fused with “total novels.” Vargas Llosa and Bolaño wrote them outrightly, while older novelists (Fuentes) and recent ones became pretentiously anxious about such feats. Ecuadorian writer Leonardo Valencia, generationally associated with the McOndo movement, takes distance from groupthink with unmistakable talent. It is evident from its effortless polish that his fourth novel set out to be worldly, not Latin American; and it is a masterpiece in which hardly anything is left out. If cognitive literary studies argue that the stories we live by form the reality we live in, Valencia ups the ante by confronting myths and realities on their own ground through a buoyant novel that matches modern masters’ use of language registers and transcendent turbulence.

“Vidas paralelas,” the second section, includes a fascinating dialogue between Laura and Dora, and another one by Dieter and Milos about Dora’s latest suicide attempt (she has survived the Shoah). Not one to let bookshelves be his muse, along with his commitment to women’s rights, Valencia’s novel presents a most upright and convincing denunciation of the conditions of women since Bolaño’s 2666, surpassing national visions that impose an exploitative normativity. He also parses contemporaneity through substories, building conduits among cultures, fictions, genders, and genres. Those stories, like “Las troyanas,” the third of the novel’s six sections, examine the grave nonrevolutionary personal consequences of the M-19 guerrilla movement’s violence, as experienced by the chameleonic character Laura in the Amazonian regions of Colombia and Ecuador.

In the fourth section, “Alquimia de la errancia,” a companion to the first on the values of carpe diem, Valencia fine-tunes his enduring concern with nomadism and art in narrative and nonfiction, a staple for his cohort. Valencia privileges the artistic entanglements, exploits, failings, and aesthetic asides of the apocryphal German painter Kurt Landor, the detonating narrative for this carefully crafted novel. Like Kazbek, he is a recurring character in Valencia’s fictions, and in his diligence, the author does not relay anything that he or his character has apparently learned for himself. After a peripatetic life that took him from Germany to Paris, Barcelona, Ecuador, Argentina, and back to his native Saxony, Landor lives for and from his art and the lessons he imparts to his students.

That transience sustains his existential abyss and reckoning. But its effect on Álvaro/Abu (not coincidentally obsessed with the color red like the thread Ariadne gives to Theseus to get out of the labyrinth) and Raúl/Raulito, the self-destructing friend he tries to help, is also a means for Valencia to continually expound on revealing relations between literature and art (particularly in the subsection on Araceli Gilbert, a nonfigurative artist and her association with the twentieth-century avant garde), employing erudite and made-up sources. Like the sections and subsections devoted to women characters, a greater lesson learned is the consequences of rebellion.

“Los informes de Taltibio,” the fifth section, like the sixth, is the most aligned with a diversity of Ecuadorian cultural and sociolinguistic practices. The characters’ private, public, and secret lives converge arguments, conversations, ideas, and scholarly writings (some Borgesian or fictitious). But Valencia aims for nuance rather than accessibility, so they mainly discuss how art and beauty develop from the sirens of new sensibilities and experiences, without kowtowing to divisive ideologies or realistic depictions of emotional confusion.

Why “Bramante’s staircase”? Wanting us to see as well as read, Valencia includes a few illustrations in “El demonio de Cantuña,” the sixth and final section based on folklore about how Quito’s sixteenth-century San Francisco church (originally designed for the Vatican by the fifteenth–century Italian architect Bramante) was completed by an indigenous blacksmith who made a pact with the devil and won. The circular, concave, and convex staircase is a metaphor of what transpires in the novel, of the inevitable dialogues among cultures, and ultimately of the novelist’s ethics. It is not lost on readers that a work of art devised by a European is somehow perfected by an Ecuadorian Amerindian.

There is no specific Latin American or Spanish novelistic tradition, cosmopolitan or regional, to which Valencia is beholden. He creates his own from a larger worldview, skeptical of the clichés, conventions, and limits of the traditions he evidently knows. With that ubiquitous knowledge he rebuilds his own language, translating structures of feeling and meaning, resulting in an extraordinary mixture of worlds his readers take to heart. La escalera de Bramante, eminently translatable, is groundbreaking; it is difficult to think of its peer in Latin America in the last quarter of a century. From the look of things and the poor harvest of translated novels of recent years, it will be a paradigm for quite a while.