His Father’s Disease by Aruni Kashyap 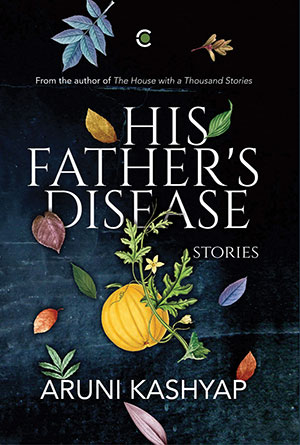 The publication of the 2013 novel The House with a Thousand Stories announced the arrival of Aruni Kashyap as a new voice in the burgeoning oeuvre of anglophone fiction from northeast India. His Father’s Disease, Kashyap’s collection of short stories, continues the exploration of the impact of political violence on everyday life in the northeast Indian state of Assam that characterized The House, while simultaneously charting new territory.

More specifically, the ten short stories can be loosely subdivided into three major thematic clusters that often overlap with one another: (1) living with political terror, (2) the complexities of intercultural encounters mediated usually via the perspective of a male, diasporic South Asian subject, and (3) representations of same-sex relationships and masculine homoerotic encounters. Kashyap’s writing is at its most uneven when we consider the second cluster—while a story like “Minnesota Nice” is quite predictable, he treats the intercultural encounters with a wry, comic touch in “The Love Lives of People Who Look Like Kal Penn” and with formal innovativeness in “The Umricans” (written entirely through a second-person viewpoint). Interestingly, the literary festival (“Skylark Girl”) or an academic conference (“The Love Lives”) often becomes the locus for these intercultural encounters, making one wonder how much of Kashyap’s
personal experiences have been distilled into fictional form.

One of the great strengths of The House with a Thousand Stories is Kashyap’s ability to evoke a sense of place, especially of rural Assam. Resonances of this ability to evoke place are evident in the three stories set in rural Assam: “Before the Bullet,” “For the Greater Common Good,” and “His Father’s Disease.” Consider, for instance, this evocative and poetic passage from “For the Greater Common Good”: “Winters aren’t harsh in Teteliguri, not like the villages at the foot of the Jaintia Hills on the Meghalaya border. . . . Meghalaya is the abode of clouds. The white clouds descend as quiet cats’ paws, and soon people are in the middle of a fog, even before the cat’s tongue can scrape their bones. . . . Here, in Teteliguri, . . . the climate remains warm and uncomfortable. Of course, when the trees in the stunted hills that guard the village start to sway, there is a storm. But the chill reigns only on nights when the winds freeze the stones, and then carries the bite of it into the houses of the village, an uninvited guest.” This evocative description of setting at the beginning echoes subliminally later when political terror infiltrates the rural everyday like an uninvited guest in this story inflected by the supernatural.

Kashyap’s strongest suits are the stories where at least two of the thematic clusters delineated above intersect. “After Anthropology,” for instance, is an engaging read that fuses explorations of same-sex relationships (between the American Matt and the South Asian Raj) with the complex situations arising out of intercultural encounters (the story recounts the couple’s visit to the house of Matt’s conservative father).

“His Father’s Disease,” in my opinion the strongest story in the collection, fuses the first thematic cluster with the third. What makes this story especially powerful is the evocation of horror through a masterful deployment of the olfactory sense. Thus, Neerumoni’s association of the smell of coconut water as she slept in her marital bed with the scene of “her younger brother and husband making love” contrasts later with her son, Anil, waking up to smell kerosene and petrol on his bed after he passionately makes love to Gurmail, an Indian soldier. Eventually, this culminates in the entire village neighborhood waking up in the haunting closure to an “unusual smell . . . the smell of burnt human flesh” as Anil dies in the blaze that consumes his house.