The Enlightenment of the Greengage Tree by Shokoofeh Azar 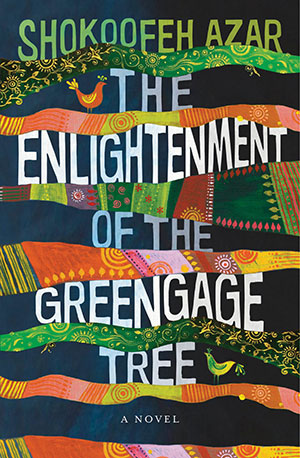 Shokoofeh Azar’s The Enlightenment of the Greengage Tree is an astoundingly imaginative work of fiction with deep roots in Persian culture. The novel depicts the life of a family forced to flee Tehran for the countryside after the 1979 Islamic Revolution in Iran. The narrator of the novel is a thirteen-year-old ghost named Bahar, who was killed in a particularly horrifying way. Bahar is the youngest of three siblings: Sohrab, her older brother, is arrested, tortured, and eventually executed; and Beeta, an older sister, is transformed into a mermaid. Her mother, who attains enlightenment after spending three days and three nights atop a greengage tree overlooking the village, struggles to make sense of the events that have disrupted their lives. Bahar’s father is perhaps the most melancholic of the family. He is the quietest, most introspective of the five and is also the last to survive.

There are stories within stories here, and like the spirits of the dead Dante encounters in hell, each character feels an undeniable need to tell his or her story. “The river ghosts began recounting their memories, and wanted me to tell my story too.” Our lives are stories, and the divine is wrapped within the telling. There are echoes of Italo Calvino, Gabriel García Márquez, and Salman Rushdie here, but only echoes. It’s a mistake to compare Azar to these other writers, for she has made her own magical realism or, more precisely, has made magical realism her own. Azar’s blend of magical realism is sown from the seeds of sorrow and destruction but never falls into the abyss of hopelessness. In fact, The Enlightenment of the Greengage Tree is a book full of hope and human resilience in the face of unspeakable cruelty and intolerance. The novel shows us a world where the fundamentalists usurp reality through a twisted misunderstanding of religion and its place in the world.

Although the novel is not without its challenges, Azar’s ability to weave a story is mesmerizing, and this novel will remind readers of why we fell in love with novels in the first place. The Enlightenment of the Greengage Tree is Azar’s first translated book in English, and it is to this translator that readers of English also owe a debt. The translator is not named. All of the information Europa Editions, the publisher, gives us is this: “The translator’s name has not been included here for reasons of safety and at the translator’s request.” It is a powerful statement, not just about art in the age of fundamentalism but of the role of the translator as such.

Azar is a bright new star in the canopy of world literature, and her ability to make us wonder, even in the face of the most unspeakable acts of human cruelty and indifference, is a testament to what will surely be a bright future.