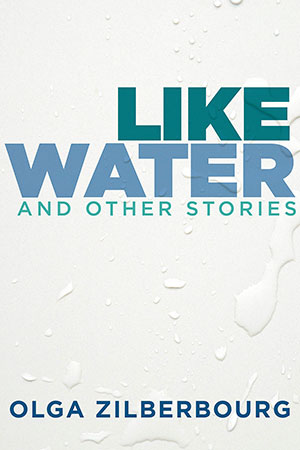 The fifty-two short stories in Like Water by Russian author Olga Zilberbourg illustrate protagonists trying to stay afloat. In her English debut, she draws minimalistic word portraits from both the United States and Russia. Born in the USSR, Zilberbourg employs homeland settings, having grown up in pre-perestroika Leningrad (formerly Petrograd, now St. Petersburg). Many tales are set in San Francisco, where Zilberbourg now lives. Wet spots on the book’s cover resemble spilled water, raindrops, or perhaps tears. Thirty-two stories are brand new, the other twenty already published in various literary venues. Some are mere snippets, with one a single powerful twelve-word sentence.

Zilberbourg’s characters explore gender, float in a sensory-deprivation tank, wonder if a miscarriage is beginning, board a Russian cargo ship to Cuba during the 1962 missile crisis, and debate how to sleep on the left side while pregnant. Irina’s an engineer. Sonya grades English essays. Janik, Lena, and Petya play a children’s card game. Jeanne sings jazz. Svetlana takes a bus. Maxine writes while her baby sleeps. Bananas rot as Liudmila tries to sell them.

The strongest stories combine social commentary with wit in trenchant observations about cultural differences. Plots center on identity reconstruction after life changes: moving to a different country, becoming a parent, or publishing a story. Zilberbourg portrays the truth and consequences of paths not taken.

The nine-page title story, “Like Water,” is a good illustration. Beginning as a middle-aged woman’s memoir set in southern California, it shifts to her youth in Leningrad. Midway into an account of three Russian teenage girls at a Pushkin play, the first-person narrator switches abruptly to a new set of folks, declaring, “Here’s a story.”

“Once upon a time,” there was an elderly couple in the Bronx—émigrés from the Soviet Union. Their doctor told them to drink water, lots of it, but they preferred tea. Gradually the California narrator works this new storyline back to the earlier one, identifying those thirsty old people as her grandparents. By offering them as a parable, she clarifies her current feelings about one of the Russian teenage friends who’s been in touch, while imagining other possibilities for her life had her parents not whisked her out of Leningrad to the US as an adolescent. This story, like others, exemplifies the difficulties of adapting to a new culture at a tender age. Zilberbourg shapes her character as a fish out of water, allowing her space to self-analyze by musing. We readers thus overhear her considerations. It’s a creative fictional construction.

“Dr. Sveta” is another example of Zilberbourg’s assemblage skills—a tale within a tale like a Russian doll, told by an older obstetrician at a dinner party to a young woman whose mother is urging her to have a baby. The labyrinthine network of two separate plots heightens the power of each. Many stories address mothering, particularly combined with employment. In the inventive “Dandelion,” an author mails off her nineteen-month-old child as a metaphorical manuscript to her New York publisher. Zilberbourg monitors the maternal phenomenon through generations as if turning a kaleidoscope to watch patterns shift from grandmother to mother to daughter.

Zilberbourg avoids muddying with too much detail. To protagonists treading water in complicated situations, she tosses life preservers, empathizing with those wanting to alter their pasts. The experiences of these characters are not unlike scenes from their creator’s own life. Clearly Zilberbourg cares about the people who populate her stories, and therefore so do we.

Like Water is a marvelous retrospective of women and their work. Why are there words? So imaginative authors like Olga Zilberbourg can paint prose with them.