Life in a Country Album by Nathalie Handal 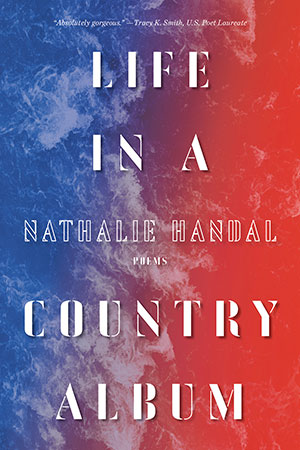 When faced with the term “country album,” I immediately think of songs from Nashville and Austin and the usual musical formula including a guitar, a twanging voice, and tragic events that unfold over beer and whiskey. I think, specifically, of the southern and western United States where the sounds of the local language often include the same cadences and colloquialisms as the very songs I imagine. Nathalie Handal’s collection of poems Life in a Country Album forces the boundaries of what a country album could really be—what the word “country” itself means, both as placeholder and a means of personal identification.

In the poem “Declaration of Independence,” Handal poeses the question, “Do you know anyone / who loves more than one country?” as if it were somehow inappropriate to even mention. Knowing that Handal is a woman with a multifaceted background, from several countries and languages herself, what I learn the most from her deeply expressive and philosophical poetry—whether it is something I can tangibly communicate or not—comes from the ways in which she meditates on place, belonging, love, and identity.

What do we find at the intersection of place, belonging, love, and identity that can be expressed in any other way than poetry? The layers of discovery in this collection are a feast of all flavors, from all corners of the world, that teach me how we must reinvent our perceptions of nation and country as identifiers and how each of us presents in such an interconnected world. What does it mean to be from (insert place name here)? How do we say I am in (insert language here)? In the poem “Une fin,” Handal asks (and begins to answer), “What’s in a land, / what’s a land? The country we pretend to go to when we can’t find the / form of our faces.” It means that country is a place one might hide under a fabricated identity, when the self is yet unknown. And what is a face if not a reflection of a soul; a visage that communicates all the places we carry?