The Lost Future of Pepperharrow by Natasha Pulley 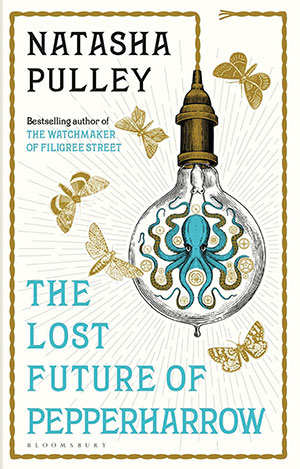 For all its strange science, clairvoyance, and electrical ghosts, The Lost Future of Pepperharrow presents a nineteenth century remarkably analogous to our own history and fraught present. It is 1888, five years after Thaniel Steepleton, a Foreign Office translator, and Keita Mori, a clairvoyant watchmaker, met in Natasha Pulley’s 2015 debut novel, The Watchmaker of Filigree Street. Together they travel with their daughter from their home in London to Mori’s estate in Japan as international tensions brew and nationalism secures an increasingly mainstream foothold.

Greeted by Mori’s wife, Takiko Pepperharrow, the pair navigates their uncertain future in which the stakes are at once intimate and global. Mori is unsettled, and not just because of the hauntings. Meanwhile, Thaniel, ill and despondent, begins his post at Tokyo’s British legation as the strain in his relationship with Mori magnifies. Then Mori goes missing, leaving Thaniel and Takiko to untangle the connection between the ghosts, a labor camp, and a corrupt prime minister whose warmonger disposition threatens Mori’s life and the safety of civilian populations.

Whereas Watchmaker is set largely in London, its sequel expands in both page count and content to stunning effect. Situated within the imperial powers of Great Britain, Japan, and Russia, The Lost Future of Pepperharrow moves seamlessly through dates and locations as it follows established characters as well as those introduced in Pepperharrow like Takiko, who is as intriguing to the reader as she is to Thaniel. Despite its expansion, the novel is neither underdeveloped nor overblown. Pepperharrow is sure to move readers familiar with Watchmaker’s beloved characters, whose individual developments and central relationships’ progress satisfy, while also attracting new readers to Pulley’s colorful and wonderfully complex work. And, for readers of her sophomore novel, The Bedlam Stacks, Easter eggs will gratify expectations of the world-building thread Pulley has drawn across her novels.

The magical atmosphere of Watchmaker continues to delight in its sequel as Pulley’s world matures into a sprawling exploration of morality during political and personal upheaval. Grounded in the reality of marginalized experiences in the nineteenth century, Pepperharrow, like Watchmaker, offers a heightened version of our own history in which fantasy elucidates the human capacity for love, acceptance, and sacrifice. In its examination of goodness amid the evils of nationalism, The Lost Future of Pepperharrow is an electrifying page-turner that proves that the nineteenth century, even imagined as a steampunk past, is closer to our current moment than we thought.