The Most Fragile Objects by Alberto Chimal 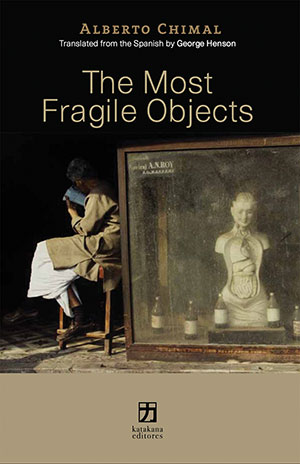 Near the end of Alberto Chimal’s The Most Fragile Objects, Latour, one of the protagonists, tries, much like all enlightened tyrants, to write a poem. His slave, Mundo, offers a minor suggestion, a way to improve the verse’s confident tone, by removing the word “like.” Latour retorts, “Didn’t you see it was a poem? If I take out words the verse loses its meter.” This response shines a light on the fact that even Latour must abide by certain unwritten rules.

A limit to seemingly unlimited power and control always reasserts itself, even over one who is a despotic master of other humans. In what can be read as deference, impudence, or both, Mundo proposes that his master exchange “like” with another word so that the meter will stay the same. Not long after, Mundo finds himself victim to the same easy logic of replaceability.

Chimal’s compact, 126-page novel, recently translated by George Henson, examines the lives of slaves in contemporary Mexico and the near-boundless capacity of human obedience and submission. It follows two master-slave “relationships” across 101 scenes organized into four sections, which are interrupted with another section called “Years Later.” Even the section “titles”—(a), (b), (c), and (d)—denote a subordinate structure, something beholden to a larger order.

Mundo and Yuyis are enslaved, respectively, by Latour and Marlene. In regard to origin and socioeconomic status, the character pairs appear to be diametrically opposed. Yuyis is born into her life of servitude, and Marlene’s unquestioning slip into domination never arises as an issue for her. The men Latour and Mundo, though, who meet online in the male-dominated technological domain, seem to be capable of choice. Mundo, as an adult, makes the decision to become enslaved. It is not explicitly indicated, but there seems to be much that can be drawn from the gendered constraints of each character.

For Latour, there is always someone else willing to take the place of his slave. But the world of Marlene, who has grown reliant on her slave, would be turned upside down should Yuyis escape. Chimal teases out his kind of static dependence, showing it as yet another form of slavery to which one can easily fall victim.

Surprisingly, The Most Fragile Objects, originally entitled Los esclavos (The slaves) is the prolific Mexican writer’s first novel published in English translation. Equally surprising is that it is not representative of his work. Chimal, who regularly employs fantastic and mythopoetic elements in his novels, calls this book a “‘realist’ writing project.” Its unflinchingly mirthless tone and its plentiful sex scenes lacking any hint at titillation or ironic distance attest to this designation. The story’s grim setting is never far from the dark, twisted fantasies of the Marquis de Sade or Pierre Choderlos de Laclos, the last of whom provides Chimal with an epigraph for one of the sections.

Contrary to his contributing a less abrupt title in English, Henson has been known throughout his career for a light touch. The translator tends to retain as much of the original as possible, in terms of syntax, structure, and, especially with this project, lexicon, while still providing English readers with a readable text. For The Most Fragile Objects, Henson goes so far as to leave a good portion of the Mexican colloquialisms and curse words in Spanish. He employs this strategy in order to better move out of the frame altogether, to disappear as much as can be feasible, allowing English-language readers to meet Chimal’s work on its own terms.