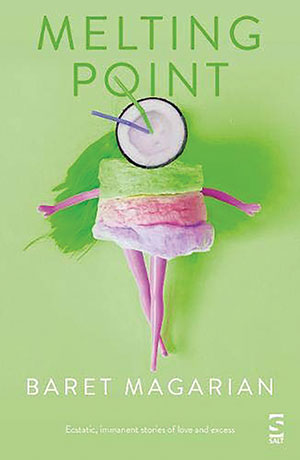 Magarian’s darkest fables foreground violence and the absurd with grotesque imagery, for example, “man-made mutations” that rise from the sea in “The Visitation” or a fork-impaled scrotum signing karmic revenge in “The Balls.” Many of their protagonists, perceiving life as meaningless, seek to control or be controlled. In “Crime and Bread,” one steals a poster she could easily buy, thereby winning “victory over life.” Another plays a computer game set in a deserted industrial park, its escalators “monotonous signifiers of the mechanistic universe.” While masturbating, she manipulates the arousal of its single “human,” then engineers his suicide, he and his company erased by “computer algorithm malfunction (‘Chimera’).” An “I” drifts through life, “asking WHY.” Passive, like many of Magarian’s males, he hopes for a female to animate the perfect, hence lifeless tableau of well-heeled hedonists on a Greek island. After his first “choreographer” departs, he awaits the next (“The Island”).

Yet those of Magarian’s protagonists who look beyond life’s violent, routinized surface find a deeper vision. The introverted diver of “The Watery Gown” only feels whole in the sea. Daring to explore a shipwreck, confronting “the uncharted terror of life’s underbelly,” she finds new confidence, spirit, and human connection. In “Erasing the Waves,” a once-floundering writer attributes his recent success to a violent near-death encounter. Having faced “the void that is all, everything and nothing, birth and death,” he treasures life, “beautiful beyond words.” Inside “The Mosque of Cordoba,” Richard experiences “visitations from the bloody corridors of history” but then glimpses infinity, which recalls his first, revelatory seaside sexual encounter. As mosque and beach merge, he feels “the world’s benign presence” and guides an old man outside.

In the last and longest story, “The Opiate Eyes of the Buddha,” Katherine, vacationing in post-tsunami Sri Lanka, joins a hotel celebration that ends in horrific murder. Having risked death to escape, she asks: “Where is the dialogue between us and space, us and God? The bridge? The cosmic cable? . . . I’ve learnt something . . . to be less spoilt, to be more grateful. To try to be alive, not to take it for granted. Maybe to be alive . . . is to be happy.”

Raising existential questions, these generically diverse and often deceptively lyrical tales suggest that protagonists who accept life as empty succumb to artifice, playing their own games or asking to be played, while those who dare to search for “real life” find connection to others and the cosmos, “touched by beauty, and finally, by grace.” As Katherine understands at last, “I am just able to see . . . I am the blueprint, my atoms came from the stars, I am connected.”