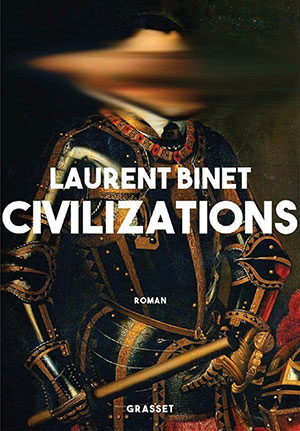 Laurent Binet’s last novel, La septième fonction du langage (2015), was an elaborate, cleverly constructed satire of the postmodernist period and many of its writers (see WLT, May 2016, 82). His new novel is more ambitious and wide-ranging, since it rewrites much of the history of Western civilization.

In this alternate history, it is the Inca and Aztec empires that invade and colonize Europe. The first part of this novel, inspired by Icelandic sagas, gives new meanings and consequences to the unsuccessful attempts at colonization by Vikings. The second part is largely a parody of Christopher Columbus’s journal. It chronicles the utter failure of his voyage and his death in obscurity.

In the third and longest part, a civil war within the Inca Empire forces a group of survivors to flee. Led by Prince Atahualpa, they eventually make their way to the island where Columbus’s boats remain, empty and forgotten. They repair the boats and set sail for a new land. Their voyage of discovery leads them to Lisbon, where they arrive shortly after the 1531 earthquake. As they learn more about Portugal, Spain, and the rest of Europe, the Incas gradually take advantage of the religious and national divisions of what is to them the New World. Atahualpa’s rise to power in Spain and other parts of Europe is complicated by the arrival of Aztec conquerors in France and England. Both groups of colonizers profit from the new transatlantic trade routes that are created after their conquests. The last part of Binet’s novel provides an alternate biography of Cervantes, who meets Montaigne before being shipped off to Mexico.

Binet combines fictional characters and well-known historical figures, whose destinies are radically changed by the novel’s civilizational reversal of fortune. Throughout the narrative, the author indulges in revised versions of historical references: an Inca rewriting of Martin Luther’s ninety-five theses, an Aztec pyramid (and human sacrifices) in the courtyard of the Louvre, the Inca sun god bringing tolerance and peace to regions previously devastated by religious hatred and warfare, the Copernican Revolution being quickly accepted due to the new religious and political order, etc. The Inca takeover of much of western Europe is accomplished through a mixture of military and political means, including relatively benevolent agrarian reforms. The invaders, who often resort to battles and bloodshed, are far from idealized. However, this alternate history of colonization does not lead to continent-wide genocide and slavery.

While there are several anachronisms and a few minor mistakes, Binet successfully interweaves his fictional narrative and the (revised) historical background. As he had done in La septième fonction du langage, Binet has produced an original, thought-provoking, and entertaining novel.