Lord of All the Dead: A Nonfiction Novel by Javier Cercas 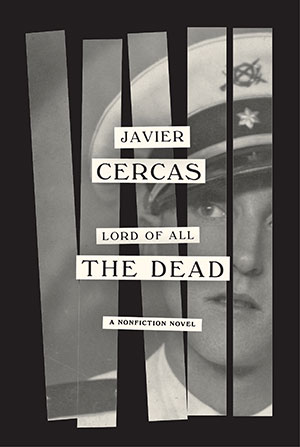 Considered one of Spain’s most acclaimed novelists, Javier Cercas knows how easily men lie to themselves in order to give themselves sufficient leeway to do unimaginable harm. They repeat the same falsehoods so often, truth blurs and becomes increasingly more elusive. Sometimes overtaken by a bout of sentimentalism and the promise of redemption, they try to confront realities they have spent a lifetime denying. But their tenderness is still laden with the same simmering brutalities that have often hampered them. Cercas doesn’t try to pretend otherwise and plays fast and loose with time, history, and memory in all of his spectacular autobiographical novels. His slippery narrators, whom he names after himself, try to distract us by obsessively chasing someone else’s secrets but eventually feel compelled to turn the lens upon themselves.

In his new work, Lord of All the Dead, he chases the ghost of his uncle Manuel Mena, adored by his mother and dead at nineteen fighting on behalf of Franco, but we soon come to realize the novel isn’t really about his uncle, despite the many pages devoted to tracking his uncle’s last movements in the war. It is about Cercas’s lingering guilt and shame about his family’s willing participation in Francoism. He is disturbed by their provincialism and close-mindedness, and their steadfast and unquestioning Catholicism, which he believes led them to take the wrong side in a war that led to the military dictatorship run by Franco, which lasted until 1975.

Cercas admits he resisted writing this book in fear of exposing those he loves. Egged on by his friend and collaborator, novelist and filmmaker David Trueba, he buckles to the pressure. He writes, “Manuel Mena was the exact paradigm of my family’s onerous legacy, and telling his story would not only mean taking on his political past but also the political past of my whole family, which was the past that most embarrassed me. I did not want to take that on, I did not see any need to, and much less to discuss it at length in a book: it was enough to have to learn to live with it.” That is, until he changed his mind once more.

Wearing an autobiographical mask frees Cercas to go into uncharted territory, but there always seems to be something stopping him from full disclosure. He hints at unidentified troubles with his wife and son as well as his mother, whose recent freak accident has left her more anxious than usual. He remembers how his mother would always talk about her love for her uncle, claiming that she cried so much after his death she couldn’t cry anymore. He wonders to himself if the “fundamental difference that divides people might not be the division between people who can still cry and those who no longer cry.” But we sense there is more to it than that. He is envious of his mother’s love for her uncle, with whom we sense he is competing for her affection and approval, despite his fears of being engulfed by her.

We wonder if his intense scrutiny into his uncle’s past is an attempt to unmask the halo from his mother’s eyes, but as the journey into who this man was continues, it becomes muddled with contradictions. His family began in Iberhernando before leaving for Catalonia when Cercas was a little boy. Iberhernando was an old-fashioned village intent on destroying the Republicans who were fighting for democracy and siding with the Francoists who had the support of the Church and the oligarchy. His friend David Trueba asks him if he feels guilty for having had a fascist uncle, and Cercas replies that he does. Cercas adds that his entire family of local bigwigs were sympathetic to the Francoist cause, but the two of them are just getting started. Trueba tells him that his own father fought on Franco’s side and remained forever convinced he was right to do so. Trueba tells him that by commission, or omission, almost everyone was a Francoist, and Cercas tries to mull over what that really means.

We can hear him wondering how he would have fared if he had been an adult at that time. Where would he have staked his ground? He remembers looking at the picture in his house of his uncle, which hung for years gathering dust, unable to see anything telling in his uncle’s young and unlined face; the camera seems to have clicked when he was thinking about nothing, but thoughts of nothingness are dangerous in Cercas’s world. They can lead to acts of unforgivable barbarity and heartlessness. His interviews with those who knew his uncle are filled with contradictions—some remember a sadistic streak; others, kindness; and still others recall an intellectual acumen that never had the time to come to fruition.

Cercas starts to rationalize his biases against his family, wondering if one could be noble and pure in pursuit of a cause they do not understand to be evil. But the truth, finally a finite entity, keeps pulling him up short.