Daughter from the Dark by Marina & Sergey Dyachenko 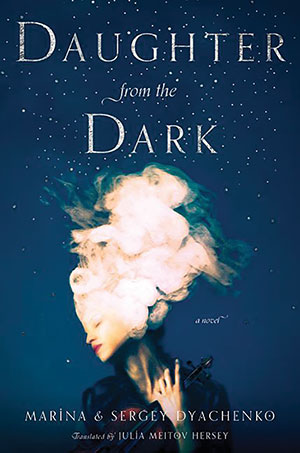 “No good deed goes unpunished”: rarely has an aphorism been so vividly rendered in fiction. But Daughter from the Dark doesn’t just offer readers an example of kindness backfiring; it takes the cynical statement to a whole other terrifying level such that, like the protagonist, we are left questioning our own judgments and assumptions.

One can’t help but compare this latest novel in English by Marina and Sergey Dyachenko to their previous work of psychological horror/dark fantasy, Vita Nostra (2018), both beautifully translated from the Russian by Julia Meitov Hersey. Both of these novels start from a deceptively simple premise: What if an intelligent young woman was offered free tuition at an elite university? Or what if a modestly successful disc jockey and radio host allowed a seemingly lost young girl to spend the night at his apartment? Only the Dyachenkos could so patiently spin out these tales, giving them texture and depth, slowly filling the reader with a kind of cosmic horror that has no need of grotesque monsters.

Daughter from the Dark exerts its power on us precisely because the Dyachenkos walk that fine line of hinting at malevolent forces while never really acknowledging (and definitely not describing) them. Indeed, the story starts off relatively innocently: Alexey Igorevich Grimalsky (aka DJ Aspirin), walking home at night from one of his gigs, discovers a girl (hugging a teddy bear) huddled alone in the dark near his apartment building. Things spiral out of control quickly after that. A group of rowdy teenagers spot Aspirin and let their dog loose on him. Aspirin runs. The dog draws near the girl, and suddenly the dark street erupts in screams and blood, as if a monster had sprung up from the asphalt (was it the teddy bear?). Grabbing the (strangely complacent) girl, Aspirin takes her to his place so he can figure out to whom he should send her the next morning. His decision to bring Alyona into his apartment changes his life dramatically.

Things move quickly, with strange men coming to the apartment ostensibly to take Alyona “back” to where she came from, Alyona explaining that she is actually from another dimension or plane of existence, and the subtle transformation of the girl’s teddy bear from an innocent toy to a bloodthirsty creature that will rip to shreds anyone who threatens her. Aspirin solicits advice on what to do with her, but life goes on—his work at the nightclub, his radio show, his frequent hookups, and his insecurities leave Aspirin unable to make a decision to drop Alyona off at a juvenile facility or a shelter. Not only does Alyona ask to stay with Aspirin, but that mysterious man who came by has somehow spontaneously generated a birth certificate for the girl that lists the DJ as her father.

Thus begins Aspirin’s and our own self-doubt: Is Aspirin actually her father? Is the girl psychologically disturbed and trying to pull off some kind of scam? Or is she some sort of nonhuman creature truly in search of her brother who, like a fallen angel, has fled perfection/paradise in order to live in a world that allows for (musical) creation? Woven throughout the plot is a question about music’s larger purpose: Is it something one should manipulate in order to create varying atmospheres and emotional registers (as Aspirin does), or is it something one creates and then expels out into the world (as Alyona does with her violin)?

The Dyachenkos refuse to answer these questions, of course, leaving the reader thinking about the novel long after turning the last page. As in Vita Nostra, the authors are able to create in Daughter from the Dark a moment of delicious uncertainty—an almost physical sensation of shock and doubt in the reader. Rarely does a book harbor such power.