Gods of the Upper Air: How a Circle of Renegade Anthropologists Reinvented Race, Sex, and Gender in the Twentieth Century by Charles King 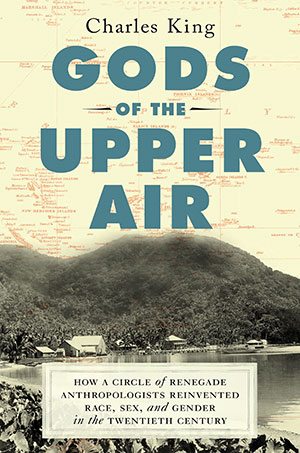 Gods of the Upper Air tells the story of Franz Boas, an outspoken critic of white supremacists, and his profound influence on three students—Margaret Mead, Ruth Benedict, and Zora Neale Hurston—and Native American linguist Ella Cara Deloria. In prose that reads like a good novel, Charles King gives us the backdrop, from the late 1800’s, through the formative years of the United States's identity as it gained international influence and acquired territories beyond the continent. Uncomfortable with the label of colonizer, it was handy to have a theory that bolstered the claim of bringing the civilization of a more advanced race to these “backward” corners of the world.

Trained as a physicist, Boas was originally interested in human migratory patterns. On his first field expedition in British Columbia, he realized that, when it came to the knowledge essential to the Inuit, his mastery was found wanting. He also began to doubt the usefulness of measuring craniums and facial features after engaging in the practice at the 1893 Chicago World’s Fair, which King describes “as though a planet-wide high school science fair had run full-tilt into a circus sideshow.” Fifteen years later, when a US government commission offered to fund a study of racial types, Boas accepted the job. He and his team measured and took family histories of some 17,821 people from various ethnic groups around New York and found there was more variation within any one group than there was between the groups. Where you grew up was more determinant than your parents’ nationality. If physical characteristics were so mutable, what about other traits that were thought inherent?

Post-Reconstruction brought a wave of discriminatory legislation, while the justice system developed “case law that made whiteness into a clear legal category.” King makes the revelation that the Nazis studied US immigration laws, Jim Crow, and the eugenics movement, which was well established here.

A foreigner (from Germany), a Jew, and an outspoken critic of racist policies, it took Boas a while to land a secure post at Columbia. The university’s affiliation with Barnard allowed Margaret Mead, Ruth Benedict, and Zora Neale Hurston to study with “Papa Franz.”

With his encouragement, Mead set out on her first fieldwork in Samoa, where she found a society that was perhaps better adjusted than her own. They certainly seemed more advanced when it came to sex. Married three times while maintaining a loving relationship with Ruth Benedict, Mead worked for the government combating Nazi propaganda and had an FBI file.

Zora Neale Hurston believed that African Americans had a culture as real as any other and as worthy of study. She gathered folktales, stories, songs, and aphorisms to produce the book Mules and Men. While doing fieldwork in Haiti, Hurston wrote the novel that would make her famous, Their Eyes Were Watching God.

Ella Cara Deloria grew up on a Sioux reservation in South Dakota. She met Boas while studying at Columbia’s Teachers College, and he hired her to verify field studies of Plains Indians. She would go on to publish the book Dakota Grammar, coauthored with Boas.

Ruth Benedict became a full professor at Columbia. Her Patterns of Culture, published in 1934, was for years required reading. She put forth the term “cultural relativity,” codifying one of Boas’s central ideas.

Gods of the Upper Air brilliantly weaves together the lives of these anthropologists while fleshing out parts of our neglected history.