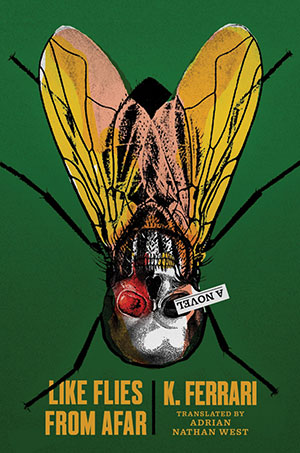 In a four-decade career as a crooked Buenos Aires businessman, the protagonist of K. Ferrari’s Like Flies from Afar has harmed and humiliated a significant portion of the great city’s population. In the 1970s, Mr. Machi—nobody would dare call him by his first name—collaborated with Argentina’s military dictatorship, condemning innocent people to prison or worse. Later, he set fire to restaurants and fixed boxing matches, collecting fraudulent insurance settlements and gambling proceeds. Today, as the proprietor of a glitzy nightclub, Machi fires staff members for petty infractions, antagonizes hot-headed adversaries, and pays a neck-breaking goon to make problems disappear.

Go through life like this, and you make yourself a target for revenge. It’s no surprise, then, that Machi lands in a dreadful bind in this allegorical crime novel. When a flat tire forces him to pull to the roadside, he heads to the trunk. There, Machi finds the corpse of a man he doesn’t recognize. This must be the work of a foe who wants him to go down for the crime. “His doubts fan out, stir up the fetid air full of familiar names, unconsidered possibilities,” Ferrari writes. “Mr. Machi finds potential enemies where before he had only seen rivals, nuisances, underlings.”

The Argentine author has an interesting backstory. According to his publisher, Ferrari was an undocumented immigrant in Florida when he was deported almost twenty years ago. He’s since published several books while working as a janitor for the Buenos Aires transit system. As translated by Adrian Nathan West, his prose is crisp, a potent delivery system for his tale of murder, treachery, and economic inequality. Ferrari sends his main character on a harrowing odyssey through the city’s back streets. As Machi looks for a place to ditch the body, his interior monologue recounts his many misdeeds, listing the people who’d happily ruin him. Meanwhile, he frets about his damaged BMW and blood-stained Armani shirt. In this way, Machi is a stand-in for the real-life corporate villains whose callousness has widened Argentina’s wealth gap and plunged the country into several corruption scandals.

Ferrari doesn’t hesitate to write of ghastly violence, but within his narrative framework, the depravity isn’t unwarranted. He’s funny, too, and enjoys mocking his main character’s ignorance. His protagonist has fallen into a “dreamlike maze,” Ferrari writes, adding: “If he knew what one was, he would think of a Möbius strip.” First published abroad in 2011, this skewering of a crude, destructive businessman would resonate in any era, but it feels particularly relevant in this one.