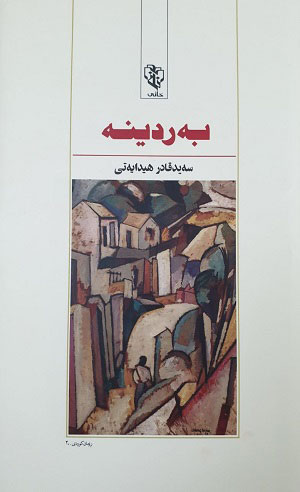 SAYYED QADIR HEDAYATI (b. 1976), a dominant contemporary Kurdish novelist in Iran, has written a number of novels, including The Yoke of Azazel (2012), Bull Roar (2017), and The Punishment of the Grave (2019) in the last decade. Bardinah (2022) is set in the early seventeenth century at the time of Shah Abbas I and includes a relatively extensive geography from Urmia (which was back then populated by Kurds) through Qazvin to Isfahan. It is the story of a homeless Kurd called Godroon, who has worked a while in the shah’s court. He narrates the story of his life, which can be read as an allegory of the life of a typical Kurd.

As the plot opens, Godroon is a servant in a mosque in a faraway village in Oshnavieh (in West Azerbaijan of Iran). He ironically introduces himself as Feqiyê Beytan, which is a play on the name of Feqiyê Teyran, the first Kurdish poet to write a literary account of the events of Dimdim. Beyt in Kurdish is a story in verse orally narrated by a rhapsodist. The search for identity starts with Godroon’s search for a father in his mother’s bedtime stories. It is in these stories that we are introduced to the historical encounter between Sultan Ahmad the Ottoman and Shah Abbas I, whose forces are described as Black Hats and Red Hats, respectively. Godroon and his mother, the Shareh of the bedtime story, who is known as Ghamartaj in Isfahan, speak about their homeland in exile. It is in this story that Godroon is introduced to the legendary hero, Amir Khan, who made the castle of Dimdim and knows that his father has been one of Amir Khan’s allies.

The most critical and artistic part of the novel is Iskandar Beg’s monologue about Kurds and Amir Khan, which is a common narrative of how the Other looks at and narrates the history of the Kurds. The monologue is addressed to Godroon, whom Iskandar calls “the blond cat,” a play on Abdullah Pashiv’s “the blind cat” in the poem “It Is Hundreds of Years.” The poem is an angry cry of how the Kurds have been treated by the Other. Iskandar Beg is Shah Abbas’s historian and is objective in his monologue addressed to Godroon. However, he confesses that he does not report all this to Shah Abbas and will omit the parts Shah Abbas does not like and does not approve of. The novel ends with Godroon joining Kak Alli, as his writer, to conquer back Dimdim.