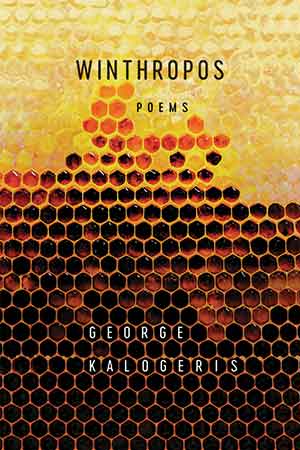 GEORGE KALOGERIS’S new poetry collection, Winthropos (2021), is a compelling study of death that will remain steadfast next to those offered by C. P. Cavafy and George Seferis, drawing from the rich Greek and Roman tradition from Homer to Horace, with which Kalogeris, a classics professor at Suffolk University, feels at home. But the new element that this poetic study of “brute mortality” bears with it is the weight of the poet’s Greek immigrant working-class family background.

It is especially his bond with his father—a butcher from a village in the Peloponnese—that stands out, articulating the “carcasses” that haunt this collection. His father’s poetic persona, in the opening poem, initiates the enigma of human existence in its sheer mortality, by pulling his leg: “Winthrop, Yiorgaki? Or is it Winthropos . . .” This brilliant Sphinx-like tongue twister personifies the place of the Greek immigrant community in Massachusetts where Kalogeris was born and grew up, and functions as a rite of passage into the convoluted world of displacement and poetry, a world that attempts to cope with unnecessary human suffering in its endless iterations experienced by both individuals and the masses, past and present.

It is exactly there in the cellar of his father’s grocery/butcher shop that he was initiated into the mysteries of the Greek consonants and vowels as they would roll up in little George’s mouth every time he would try to pronounce the Greek name of the imported products like peponia (melons), meli (honey), etc. And it was there by the walk-in freezer that the protean transformations of human tragedy would originate, as he would hear “the clink and glint” of his father’s “dangling cleavers and knives and saws,” sounds that the latent Muse would reactivate to sharpen her instruments.

Indeed, Kalogeris’s Muse is at its peak in this collection, following his Guide to Greece (2018) and unafraid to unveil the vulnerability that erupts like a Greek lament-moirologi: sixty narrative poems that are arranged in six parts as if in a funeral procession, beginning with the preamble poem, “Winthropos,” where we read: “And if you get lost, Yorgaki, what will you do?” If one wants to find an answer to this enduring enigma, dwell in this outstanding poetry collection that redefines diasporic poetry and converses on equal terms with giant poets, ancient and contemporary.