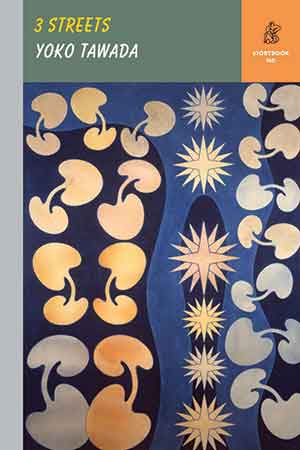 IN “MAJAKOWSKIRING,” the second story in Yoko Tawada’s Three Streets, an unnamed narrator encounters an undead writer. Vladimir Mayakovsky committed suicide in 1930, but in contemporary Berlin, on a street that bears his name, the Russian poet—or perhaps his ghost—is having his say on matters great and small. “A moment ago, he’d been talking about lost love and pineapples,” the narrator notes, “and now he was going on about ‘terrible times’ and politics.” This might seem like a bizarre cameo appearance, but within the context of this slender, captivating book, it’s perfectly reasonable.

Tawada, whose novel The Emissary won the 2018 National Book Award for Translated Literature, writes a singular, uncanny brand of fiction. In Three Streets, women, men, and human-adjacent beings land in slow-simmering metaphysical adventures. Her characters face predicaments and puzzles that present the reader with interesting new ways to think about language, inspiration, history, and chance. Each of the book’s three stories is set in Berlin, where the author, who was born in Tokyo, now lives. Each takes its title from a street named for a dead artist. Each features a nameless narrator.

In “Kollwitz Strasse,” our narrator is in an expensive grocery store filled with affluent young families when a “ghost-child” materializes and drags her to the candy aisle. The young specter uses antiquated words and seems unfamiliar with post–World War II products. The narrator, noting that this is plainly “not a child of this age,” is reminded of Käthe Kollwitz; the artist’s black-and-white prints depicted Germans who, like Kollwitz herself, lost nearly everything during the world wars. Outside, the narrator sees a city with no discernible colors. Has she become a figure in a Kollwitz etching? Like Tawada’s other stories, this one doesn’t spotlight a single, easy meaning, though it seems clear that she’s remarking on complacent twenty-first-century consumerism, the transformative power of art, and the wounds of war.

“Pushkin Allee” opens with the narrator disembarking from a subway, only to see that her “body had shrunk to the size of a child’s” (like many strange developments in these dreamlike stories, this happens without warning or explanation). She spots a girl on a bike, which evokes vivid recollections of her own childhood. For a moment, it’s the 1960s, and a Japanese TV broadcaster is talking about the anniversary of the end of Second World War. This leads to dark musings about secret police and blood-drenched borderlands. In an open field, which she imagines might’ve once been the site of carnage, people practice yoga. Her walk through the present-day city becomes a reflection on Cold War Berlin, occupying armies, the plight of innocents during periods of deadly strife, and the ways in which nations confront, or flee from, the past’s harsh truths.

“Majakowskiring” is just as thought-provoking, if even less straightforward than the other two tales. Haunted by the doomed Mayakovsky, the story centers on another discombobulating walk through a Berlin that may have “slipped back in time.” She watches an antinuke march, notes that today’s clouds “all have human faces,” sees that Mayakovsky appears robust—and quite talkative. What follows is an oblique rumination on randomness, political resistance, and language. Apropos of nothing specific, the narrator laments that she rarely hears “words like ‘imagination’ or ‘creativity’ anymore.” Tawada herself would never say so, but few writers embody these words better than her.

“The mystery of what it means to be human”—this phrase, which pops up early in “Kollwitz Strasse,” is an apt description of what Tawada aims to explore in these stories. From one moment to the next, her narratives can be mystifying. In time, though, they cohere into engrossing meditations on historical memory and the oft-baffling nature of life in this century.