The Psychology of Totalitarianism by Mattias Desmet 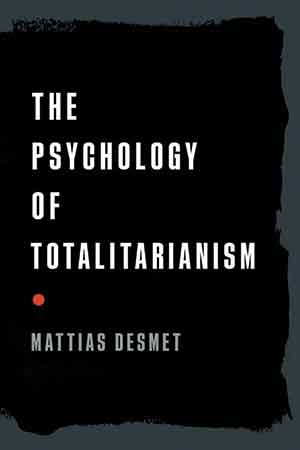 MATTIAS DESMET IS professor of psychology at the University of Ghent (Belgium). He is well known in academic circles for his research on fraud within academia: Desmet analyzes the psychology of the researcher who gives in to the need to provide interesting results. During the Covid-19 crisis, Desmet played a critical role in pointing out fundamental mistakes in the way in which Western governments responded: according to Desmet, the policies of lockdown have been more detrimental and harmful than the virus itself. Governments are hiding this fact in the statistics that count victims of the Covid-19 policies as victims of the virus, thus creating an ever-growing monster. In his new book, The Psychology of Totalitarianism, he gives an account of how the mentality responsible for this mistake is shaped historically and psychologically.

At the origin of this psychology of totalitarianism is not some diabolical plan to control society, Desmet argues, but the way in which the world has become disenchanted: the success of science has led to a paradoxical “faith in science.” This faith in science is paradoxical because it distracts from the fact that science is essentially a methodology, not a consistent worldview. Taking science as a worldview, the world appears as a meaningless substance. As a result, the subject is cut loose from its traditional connections to the world and to society, which causes immense existential stress and anxiety. The ensuing atomized subject, Desmet quite plausibly argues, is highly vulnerable to totalitarian narratives.

Given Desmet’s focus on scientific integrity, it is surprising, and sometimes more than a little grating, how carelessly he presents his essay. The story of how science and modernity altered the worldview in Western society as it is presented here lacks the depth and sophistication of a work that analyzes the same development like Charles Taylor’s A Secular Age. The first four chapters are lifted probably from a course Desmet teaches at Ghent; they are only connected to the book’s thesis by way of two-sentence paragraphs at their very end, wherein the author glosses Hannah Arendt. Also, Desmet’s argument on the Covid-19 crisis is entirely one-sided. While he attacks the virologist who claimed that the young man who died after attending a party that violated the lockdown “didn’t deserve pity,” it is not evident that Desmet has much sympathy to those who died or whose lives are otherwise disrupted by the virus—the threat of Covid itself is never addressed seriously in the book. Finally, this critique of society ultimately relies on a mystical and religious attitude toward reality, which is certainly deserving of study, but it is mostly taken for granted here.

That said, and perhaps to a degree because of these privileges that Desmet assumes, The Psychology of Totalitarianism makes us question to what extent we are implicated in and duped by the culture of totalitarianism. Indeed, Desmet talks about how, if the ideologue does not believe his own narrative, he nevertheless believes that his cause warrants that exaggerated and distorted message. In that sense, Desmet’s book cannot rise above the playing field he aspires to analyze objectively.