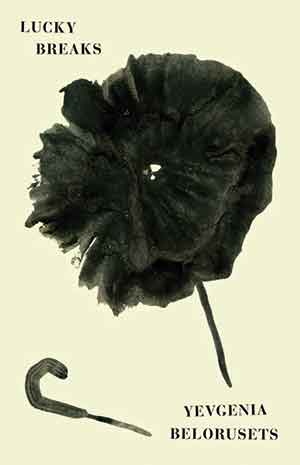 LUCKY BREAKS, by Yevgenia Belorusets, is an experimental approach to the novel that neither follows a traditional story arc nor adheres to strict notions of fiction or non. Comprising thirty vignettes, the book offers glimpses of Ukraine following the 2014 Russian invasion through the lives of ordinary women whose lives have been upset by displacement, death, and loss. Individually no one story serves as a synecdoche for life in contemporary Ukraine, but collectively they offer a polyphonic portrait of a resilient society under siege. Belorusets mostly works as a photographer, which is reflected in her storytelling—momentary glimpses wrapped in imagined histories.

Despite its short one hundred pages, the slim volume (printed in an unusually small typeface) is a bit of a slog. The intense brutality of war, which cuts people off from their pasts and futures, operates on the page as well. Belorusets’s fractured ultrapresent may well reflect the reality of life in a prolonged, stagnant war. As a novel, however, it fails to provide the cohesion and momentum that pull a reader from one existential disappointment to the next flash of mundane happiness. Perhaps it is better to think of it as a collection of prose poetry, which might also be how translator (and poet) Eugene Ostashevsky sees it. If it is dipped into sporadically, rather than read straight through, each story imprints on the imagination without getting lost in the litany of despair.

Fortuitously timed for its publisher, Lucky Breaks offers us an opportunity to reflect on the politics of publishing. Belorusets writes in Russian and has here a Russian-born translator. Neither of these facts is inherently objectionable. Today, however, when the literary world has taken a sudden, intense interest in words coming out of Ukraine, there is a severe dearth of Ukrainian material available in English. Most books on top 10 lists about Ukraine are not written by Ukrainians. The prizewinning I Will Die in a Foreign Land was not written by a Ukrainian. As a translator of Ukrainian myself, I know there are books and articles and essays that deserve a wide, English-speaking readership, yet the link between Ukrainian pen and American press is mostly missing. At a time when Ukrainian culture and language are enduring their most intense attack since the early twentieth century, what does it mean for we anglophones to persist in approaching the country via a colonial power? If nothing else, why are we not more curious about the power of this language that the Russian Empire has fought to suppress, to the brink of self-destruction and the collapse of democracy? (Editor’s note: Read Michael M. Naydan’s recent recommended reading list of more than forty works by Ukrainian writers translated into English)