Walk Me to the Corner by Anneli Furmark 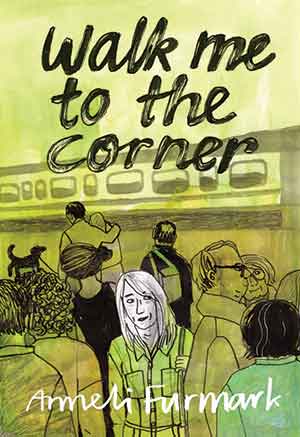 WALK ME TO THE CORNER is the tenth comic book by the award-winning Swedish painter, illustrator, and graphic artist Anneli Furmark and her second to be translated in English. (Set in a different time and social environment, Red Winter is both a forerunner to and an antithesis of Walk Me to the Corner.) The title is from a song by Leonard Cohen whose theme and lyrics provide other, subtle references throughout the book. Simply said, it is the story—sensitively told, beautifully drawn, and intelligently translated—of the intense, disruptive, and ultimately open-ended love affair between two middle-aged women in today’s Sweden.

Elise is a magazine writer; Dagmar, an otolaryngologist. The two meet at an event where they keep “crossing paths all night,” talk briefly, and eventually say goodbye, holding “each other for maybe three seconds.” Later on, lying in bed next to her husband, Elise wonders: “Were those three seconds the start of everything?” The answer is in the bathroom mirror where, soon after getting home, she scrutinized herself, seeing “everything that was lopsided. Everything that was fluffy and pasty,” and, “like an insecure teenager,” questioning it all.

Soon, it is also in the timid, explorative texts the two women start exchanging, until they decide to meet and “The Inevitable” happens. For Elise, it is the beginning of an alluring journey into uncharted territory, something completely new and very different from her love for Henrik, her husband of twenty years, but also more introspective and unsettling than Dagmar’s feelings for her, which are straightforward and genuine but apparently not strong enough to result in a separation from her wife, Jenny, and “the girls.” On the contrary, Elise’s uncompromising passion will lead her to a broken marriage and a new life but also a new sense of clarity and determination. “I want to be with her,” Elise tells her therapist; and when he insists, “And if that’s not possible?” she hesitates, but only for a second. “If that’s not possible . . . I still want it.” As it turns out, Dagmar wants it, too, in her own enticing yet elusive way; and we feel that, if their “steps will not always rhyme,” they will take them to the corner and eventually help them turn it.

Over the years, Furmark’s style has developed an affective consonance between graphic line and coloring, or between the narrative element and the expressive atmosphere—the mood—of her stories, and in this respect Walk Me to the Corner represents her most accomplished result to date. Frame after frame, a gorgeous spectrum of pastel washes, often highlighted by delicate penciling, provide the emotional background against which the characters are rendered in scrutinizing pen strokes. And never is such a dialogue more effective and moving than in the more intimate scenes, when color absorbs the characters and they acquire the transparency of a Chinese painting.