A Trail of Crab Tracks by Patrice Nganang 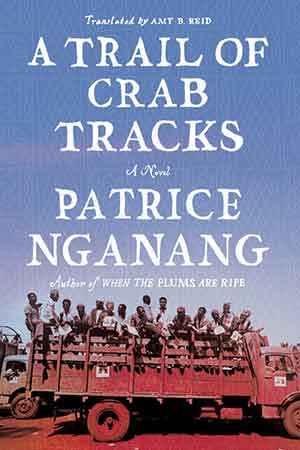 PATRICE NGANANG’S NEWLY translated novel, A Trail of Crab Tracks, follows the relationship between Tanou, a Cameroonian American professor, and his father, Nithap, an aging retiree who is reluctantly persuaded to visit his son in the US. The first half of the novel focuses on the contemporary relationship between father and son split between homeland and diaspora. The second half, in which Nithap narrates his early life to his son, takes as its main subject the legacies of the UPC Rebellion and the role of violence and loyalty in the perpetuation of intergenerational memory.

The UPC Rebellion was a war for independence fought primarily in the Bamiléké region of Cameroon against the French, beginning in 1955. By the time of independence in 1960, as described in harrowing detail in the last one hundred pages of A Trail of Crab Tracks, the French had brutalized the Bamilékés, creating concentration camps, burning down villages, and leaving behind the heads of executed rebels in order to terrorize the local population. The conflict continued well after independence, with violence and terrorism between guerrilla groups and the new French-backed Cameroonian regime tormenting the Bamiléké region until the early 1970s.

Because of the atrocities committed by the French as well as the fact that France has continued to back successive autocratic regimes in Cameroon up until today, the UPC Rebellion—also known as la guerre cachée, or the “Hidden War”—is notoriously underdocumented. As part of a public relations campaign to rebrand France’s dubious relationship to its former colonies, French president Emmanuel Macron traveled to Cameroon this past July to announce the opening of French archival materials on the UPC Rebellion. In this context, Nganang’s novel could not be more timely. Frank discussion of the Hidden War in Cameroon remains taboo, and the nature of memory and the legacies of violence under these circumstances are deeply woven into the themes of the narrative. The way in which the novel jumps between time, place, and characters can be chaotic; the prose is oftentimes more obscuring than clarifying—a quality that is evocative of the nature of politics and rumor in contemporary Cameroon.

Nganang writes unapologetically for a Cameroonian audience; there are some clues left in the footnotes meant to help a foreign reader make sense of local subtleties. But the end product lays bare an effort to plumb the depths of the Cameroonian soul in the most intimate ways. Nganang’s character Pastor Tbongo declares to Earnest Ouandié that Cameroon lacks a soul, “But that’s what we need to create for this country. That’s the only task for our era. For our own survival, we have to teach Cameroonians what unites us; we have to give some substance to this country that is self-destructing. That’s what I’m trying to do here.” Words that are as true today as they could have been sixty years ago.