The Second Substance by Anne Lardeux 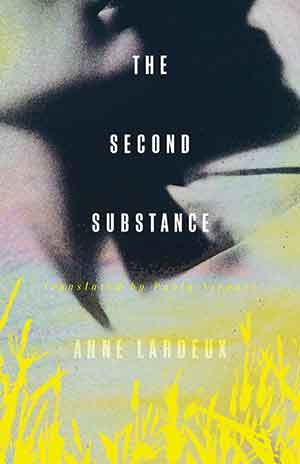 POISED ON THE “chasm’s edge,” Anne Lardeux’s The Second Substance demands that readers query their environment—its possibilities and limitations—through “a terrifying, uplifting mirror.”

Even the epigraph feels weighted in this debut novel, translated by Pablo Strauss from 2021’s Les mauvais plis; readers immediately abandon expectations of “any easy kind of absorption” with the lengthy excerpt from poet Anne Boyer’s “At Least Two Types of People.”

The type of person who is identified by their “resistance of the world as it is” holds Lardeux’s attention—those who possess a sort of repellent while “events and opportunities of the everyday world wash over.” Lardeux’s “second substance” cast also includes the central character from Agnès Varda’s 1985 film Sans toit ni loi (Vagabond).

Lardeux’s vagabond narrative, like the film, begins with an ending. Shifts in time and space disorient readers’ experiences, polyphonic voices reflect characters’ varied experiences of the novel’s reality, and excerpts from a dramatic script—complete with directorial instruction—directly engage readers.

Nonetheless, disconnect is pervasive: “breaks in the fence,” “the desolate light of the disconnected phone booth,” and “cracks [patched] with prescription drugs and alcohol,” in a world where even “over the digital distance, you can feel her not listening.”

Yet there are instances of connection, like “a burr stuck in a sweater” and a “play of the light that blurs the lines between inside and out.” Significantly, one character insists that the storyteller “work in enough sex so people can at least get off a little” because sex “isn’t incidental” but is, rather, the driving force.

Resistance isn’t only the mind’s action; “we must also do this with our bodies.” Alluding to Québécoise feminist writer Marie Uguay, Lardeux considers how we atrophy and flourish, how we survive and decay, how we inhabit the substance of which we are made. And quoting Carson McCullers’s The Member of the Wedding (1946) evokes the darker reading of Frankie’s coming-of-age, what Ali Smith describes as a “combination of hope, hopelessness and callousness.”

As Boyer’s poem unfolds beyond the epigraph’s borders, the two-types discussion shifts from people to fortunes, with the second described as “baffled”: fitting, too, for Lardeux’s novel, which prioritizes questions over conclusions.

Shelve Anne Lardeux with Québécoise writers like Mikella Nicol and Christiane Vadnais, and internationally with Yun Ko-eun, Véronique Tadjo, Jenny Hval, and Sandrine Colette—writers whose characters are terrorized and galvanized by narrative.