Of Saints and Miracles by Manuel Astur 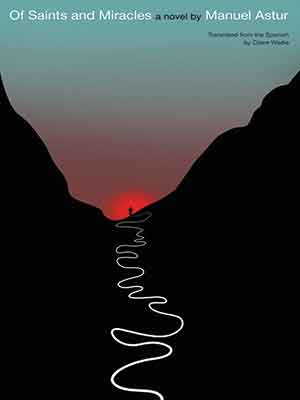 BORN IN 1980 in Sama de Grado, Asturias, Spain, Manuel Astur is a teacher, poet, fiction writer, essayist, and journalist. Of Saints and Miracles is Claire Wadie’s fine translation of his second novel, San, el libro de los milagros (2020). Although he has pursued his professional career in Barcelona and Madrid, Astur’s rural roots in Asturias as well as his intellectual and literary preoccupations are clearly present in this eclectic work.

The novel’s protagonist, Marcelino, known as Lino by locals, is a young man who, along with his brother Manuel and their mother, was physically abused by his alcoholic father. Lino was also tormented as a child by other children, who tortured animals for amusement, and by a priest who sexually molested him. As a result, Lino, who was mentally challenged, took refuge in solitude and his chores.

At the beginning of the novel, we discover that Manuel, who inherited his father’s malevolent character, has sold the family farm and told Lino he must abandon his home and leave everything behind. In an outburst of fury, Lino punches his brother, who collapses to the ground. Now fearing that he has killed his brother, he takes refuge in the countryside, hiding and living off the land.

There is also a mysterious character named Lugo who shares the stories and history of the community, in a part of what is known as vacant Spain, the towns and villages in the countryside that have been abandoned by those who have left in search of greater opportunities in the cities. Lugo, who says he seeks to learn all the stories so he can “live on forever in them,” also speaks in first-person plural throughout the novel. There is an array of interesting rural characters, each with their own heartrending histories. In addition, two popular narratives—a cumulative story for children, “The Cheese, the Old Woman, and the Old Man,” and a fable with nature and language as protagonists—are woven into the text.

In the popular imagination, a legend is fashioned around Lino’s travails, and miracles are attributed to him. Although he does not understand his circumstances and has been abused by others, like his mother, he is empathetic and kind toward others. For the storyteller, all we have are stories, but these fictions are good for us because they “can appease the bad and cheer the good” and remind us “that everything is a story.”

Of Saints and Miracles offers a window into the ethos of a rural community, where religion, legends, and superstitions hold sway. In sum, this beautiful, thought-provoking, and haunting novel, which is captivating in its poetic portrayal of a rural tragedy, reminds us that everything is a miracle.