Prize for the Fire: A Novel by Rilla Askew 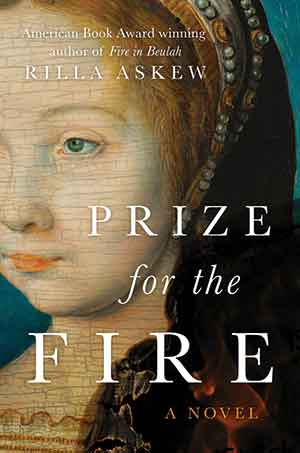 IS MARTYRDOM FATED, a choice, both? Thus the parameters of Rilla Askew’s new novel, whose title and prologue leave no doubt of the end.

Circumstances certainly push Anne Askew (no known relation) toward her death in 1546. Her lowborn, abusive husband creates a private hell at home, impelling her, as a woman of intelligence and determination, to take more public actions. She grows from debilitating doubt to an overwhelming faith, to the point of believing scripture should prevail over royal policy and the laws of the land.

One recognizes Anne as a type: the young protagonist, acting out, endangering herself and her family. As in such stories set in the segregated South, one thinks, “Weren’t you taught you just can’t do that?” You think this, even though you are sympathetic with the protagonist and might wish conditions were better. Given her horrible home situation, Anne’s impulses are plausible: to seek help from her brothers, to sneak off, to appeal to hostile authorities for a divorce. The fact that her husband destroys her translated Bible and she is denied her maid, to whom she read passages privately, pushes her to read a very public Bible in the cathedral, out loud, attracting villagers and the local vicar. Later, in London, reciting memorized passages in meetings is construed as preaching by the examining councils, something forbidden for women. The fact that she has a superior command of biblical passages helps seal her fate.

Askew varies the point of view, so that the reader does not become too trapped inside Anne. Some chapters feature limited third-person accounts focusing on one of the brothers or her maid; some feature an omniscient narrator; some jump into stream of consciousness. Two well-placed chapters display the real risks of political involvement: a conversation among the wives and then the somewhat naïve expectations of advancement shown, in a separate room, by their increasingly inebriated husbands. The women show a keener sense of the sufferings of the past and what will likely come.

The attention to the clothing, appearance, crowds in the ceremony, and court scenes is quite impressive, as is the author’s handling of the very real issue of the Eucharist. Anne articulates the Reformist view of the elements as symbolically representing the body and blood of Christ, while her maid, Beatrice, emphasizes how important it is for traditional believers that the bread and wine are consecrated by the priest.

The novel shows the risks of a firmly confessed faith in a time of political and religious change. And neither does Rilla Askew flinch from articulating the likely consequences for families and friends when one person maintains such a faith to the end.