Out of This World: Speculative Fiction in Translation from the Cold War to the New Millennium by Rachel S. Cordasco 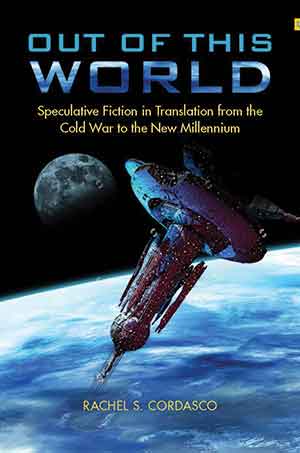 DURING ROUGHLY THE first half of the twentieth century, the literature of the fantastic in English was subdivided into well-delineated genres—science fiction, fantasy, horror—with forms such as surrealism and magical realism lumped into the catch-all category “literature.”

In subsequent decades, however, these categorizations became increasingly inappropriate, as authors began to merge genres and mainstream authors began to incorporate tropes from various genres. Thus was born the collective cross-genre label “speculative fiction” (SF). This worldwide phenomenon is the topic of Rachel S. Cordasco’s remarkable book, Out of This World.

To appreciate this unique book, you need to be aware of its scope, content, and approach. For this is no mere annotated bibliography. Rather, each chapter is a guided tour through speculative fiction in translation (SFT) from a “source language” into English. Those fourteen languages are Arabic, Chinese, Czech, Finnish, French, German, Hebrew, Italian, Japanese, Korean, Polish, Russian, Spanish, and Swedish.

Although a handful of works of SFT have been widely read since (at least) the 1871 translation of Jules Verne’s Journey to the Center of the Earth (1864), the first major wave of SFT began in the mid-twentieth century. Accordingly, Cordasco focuses primarily on books (not short stories) of SFT published since the 1960s. Each chapter begins with a short, invited introduction by an author, scholar, translator, or editor; these introductions provide a (very brief) contextual overview of SF in that chapter’s source language.

The rest of each chapter consists of discussions of individual SF texts that have been translated into English. In addition to providing brief plot information, Cordasco situates each book in the author’s body of SFT and illuminates extraliterary influences that shaped the work and its selection for translation—also including, as appropriate, cultural and linguistic factors that affect translation.

An especially interesting example is modern Hebrew, whose structure and semantics differ radically from those of English. As Cordasco explains: “Hebrew is . . . a writing system in which the vowels are implicit. Thus, any given sentence [leaves] the reader to determine word function and meaning based on context or common sense.” So, while the inherent nature of Hebrew “becomes a powerful strategy for reference and allusion, direction and misdirection, that can be so effective in SF,” these very qualities “often lead more to obfuscation or fabulation than to clarity,” a challenge for any translator.

Most chapters treat a sequence of individual texts that constitute SFT from that chapter’s source language. In others, where appropriate, Cordasco devotes a significant portion of a chapter to the oeuvre of a single, important, widely translated author.

For example, a significant part of her chapter on Polish SFT concerns the works of Stanisław Lem, whose nineteen books of SFT encompass a bewildering range of topics and forms, from his science fiction novel Solaris (1961) to his collection of introductions to nonexistent books, Imaginary Magnitude (1984). To guide readers through this intriguing maze, Cordasco begins with an overview of Lem’s primary themes. She then divides his translated works into three categories and begins discussion of each category by identifying their key concerns and qualities. All this sets the stage for treatment of individual works in that category. This approach is perfect for readers seeking to sample Lem’s work but put off by their number and diversity.

We live in something of a golden age for SFT, more and more of which is becoming available with every passing year. Beyond invaluable contributions of small presses, this abundance is due to the internet: blogs, ebooks, online translations, self-publishing, and so forth. But why read SFT? For one thing, it expands one’s appreciation of the diverse ways authors use SF to comment on “historical traumas and contemporary sociopolitical issues.” For another, it reveals perspectives of nonanglophone cultures on global issues such as the impact of technology, encounters with the ineffable, and political or ecological dystopian futures.

This essential and apprehensible guide—written primarily for readers, not scholars or critics—belongs in every library: large or small, public or university. And, although quite pricey (one hopes for a less expensive paperback edition soon!), it will prove a worthwhile purchase for any reader of SF who wants to explore the rich body of SFT. For us, Cordasco is like a knowledgeable, congenial friend, guiding us through the ever-growing body of SF from the rest of the world.