Bloodred Dragonflies: New and Selected Poems in English and Versions from the Filipino by Jim Pascual Agustin 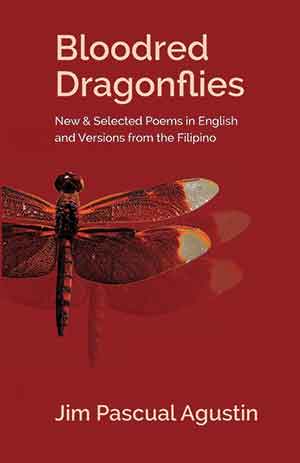 JIM PASCUAL AGUSTIN’S Bloodred Dragonflies is a stunning, elegiac collection that showcases Agustin’s writing across three decades. Born in the Philippines, Agustin moved to South Africa in 1994. Despite his nearly thirty years living abroad, Agustin’s poems are grounded in memories of the Philippines and express a longing for home, while also documenting his life under the Marcos regime and responding to the violence of the Duterte presidency.

In the first poem, “After the First Monsoon Rain,” Agustin describes an experience of pure joy, a boy leaping into puddles with other children after a storm. The innocence of the scene is palpable in the first two stanzas:

Doors along the narrow line of houses
empty out with children,
banana leaves bend to drop
the last beads of rain down their palms.

He is among them, this boy
with the breath of summer.

As we progress through the collection, this Blakean innocence inevitably transforms into experience, an awareness of the traumatic histories of war in his homeland and the loneliness of migration. In “Decades after the War,” the speaker sees the ghost of Japanese soldiers from World War II near his school, suggesting the unavoidable knowledge of this history: “Outlines / of shadows, transparent shapes in a huddle / round the lone water tap.” In “Seeing in the Dark,” a fortune teller gives the speaker a warning about his future, predicting the challenges he will face after leaving his home:

“Seeing in the Dark” is an ars poetica of sorts. In claiming that the speaker will “bury the dead among the living / and resurrect them unwillingly,” the fortune teller predicts the speaker’s ability to bring back the dead through poetry.

Agustin’s poems are characterized by their brevity and imagistic observations. They are reminiscent of haiku in their concision and subtlety. These poems are perfect examples of the popular creative writing dictum “show, don’t tell,” each image rife with productive ambiguity. That said, Agustin is also gifted at writing the emotionally unambiguous poem; his work is politically charged, practicing what Mahatma Gandhi called satyagraha, holding truth to power. In “Dragonflies,” a poem that contains the book’s titular line, the speaker reflects on how the Marcos regime tore down the speaker’s childhood home to build a highway named after the dictator. This poem not only demonstrates how the government displaced its people but also shows how the Marcos’s extravagance negatively impacted the natural world. He writes that the government:

built a bridge that tore the shoulders
of the river. Then they carved out the hill
that was almost a mountain.

We shook our heads at your tombstone
stretched to the horizon.
The last of the fields
where running children
would freeze in their tracks
at the sight of bloodred dragonflies.

This final image illustrates the wide-ranging damage caused by the corrupt administration. The image of the “running children” echoes the boy in the first poem, but the contrast between the sets of children is noticeable; while in the first poem, the boy freely enjoys his environment, these children are limited to “the last of the fields” and the rare glimpses of natural beauty.

Agustin also writes openly about the horrors of the Duterte administration. In “We Will Not Allow the Dead to Be Silenced,” the speaker writes: “The man who curses shall be cursed / to live forever in the stories we shall tell our children.” The poem references the thousands of people who were killed in Duterte’s so-called War on Drugs: “Though the dead may be left / unclaimed in morgues / or dumped on the side of the road, / their faces bound with packaging tape, / they will never be silenced.” As in “Seeing in the Dark,” here, the speaker “resurrects” the dead in this poem by giving voice to their suffering and implicating “the man who curses.”

Bloodred Dragonflies is a deeply visual book. The world around is described in detail and becomes Agustin’s palette; images are employed for their emotional resonance, and they’re used figuratively to communicate a feeling or idea. More than that, however, seeing and telling become a way to remember history, to resist its repetition. Many of these poems not only elegize loved ones; they also memorialize their experiences of struggle. They unsilence what the powerful wish to keep silent. During a period when free speech is being undermined and facts distorted, these poems of witness are startling and incredibly necessary.