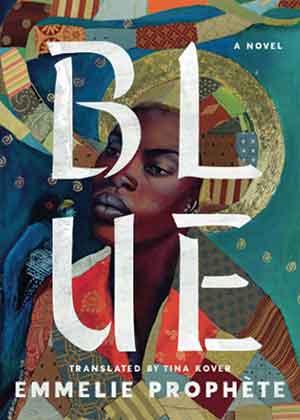 EMMELIE PROPHÈTE’S Blue is a study in liminality and alienation. Blue is set in a Miami airport, a liminal space where the narrator awaits a flight back to Haiti after attending her aunt’s funeral in Florida. Seeking to make some sense of this foreign burial, the narrator retraces her maternal line’s intergenerational movement from the Haitian countryside to a regional city, then on to the crowded Haitian capital, and finally to the major cities of the Global North. Haiti, she realizes, is a “phantom country” where everyone dreams of “elsewhere.”

Meanwhile, the post-9/11 American “elsewhere” is “ever more hermetic, more brutal.” The narrator bears witness not only to her own family’s silent suffering over many years of irreversible separation and loss but also to an unspoken collective anguish for “the slow death of my land, its inexorable slide toward a foreign elsewhere, toward the sea, toward abysses near and far.”

The deeply alienated narrator longs for a wholeness she can only imagine—love, memory, the ability to grieve, the words to tell her family’s story. “How do you tell a story you don’t know?” she asks. Estranged from the past, from her country, her family, even her own body, she has lost faith in an “indifferent” God. Broken mirrors are woven throughout the text, signaling a fragmentation of self. Meanwhile, the narrator’s unbroken ancestral attachment to coffee, from her earliest childhood memories to the present day, from her grandmother’s rural home to the cosmopolitan Miami airport, seems to suggest that narrative integration remains possible even if heartbreakingly elusive.

Originally published in 2007 as Le Testament des solitudes, Prophète’s prose reads like a long poem. As such, in the context of Prophète’s broader oeuvre, Blue is a transition piece leading from the two volumes of poetry that preceded it to the five novels that came after. Tina Kover’s translation re-creates the opacity and lyricism of the original French. Most notably, Blue faithfully reproduces the author’s use of repetition. As words such as “misery,” “elsewhere,” and “solitude” appear over and over in the text, what gradually emerges is an impressionistic portrait of the progressive alienation of a person (the narrator) and a people (the Haitians of her homeland and its diaspora in the Global North). While the English title, Blue, certainly reflects the general mood of the text, it fails to capture the notions of legacy and loneliness, both of which are central to the original title and to the text itself.

Blue is not an easy text. One needs patience and very likely multiple reads to fully grasp this jumble of disintegrated, traumatic memories. However, the persistent, empathetic reader will be richly rewarded with profound validation of and/or deep insight into (as the case may be) the true emotional and psychological cost of mass emigration from the Global South.