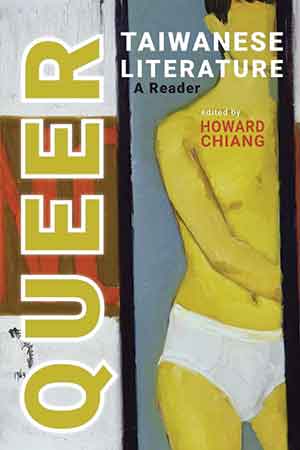 PUBLISHED SHORTLY AFTER Taiwan became the first country in Asia to legalize same-sex marriage, Queer Taiwanese Literature is described by its editor as “an extension of the legacies of queer activism . . . in Taiwan” but also serves more broadly as an international broadcast of Taiwan’s values and vibrant cultural history. While the included stories, which were written and translated between 1975 and 2020, were written for a domestic audience, they take on new meaning when presented together to an international audience, particularly to an American audience that will recognize parallels to its own struggle for LGBTQ+ rights.

Queer Taiwanese Literature comprises seven stories by both lesser-known and more established writers, including, notably, Chi Ta-Wei, author of the queer sci-fi novel The Membranes, which was chosen by Words Without Borders as one of the best translated books of 2021. “Howl,” Chi’s contribution to the collection, is told from the perspective of a young gay man grappling with the AIDS crisis in 1990s Taiwan, a period when Taiwan’s expulsion from the United Nations and its thirty-eight-year period of martial law lingered in fresh memory. The narrator’s infected friend, Amoeba, is fixated on San Francisco, which is popularly depicted not only as the epicenter of the stateside AIDS epidemic but also as a hub of American gay culture. Amoeba’s conflation of gay culture with San Francisco is infectious, leading the narrator to become captivated by American poet Allen Ginsberg’s collection Howl and Other Poems, a reflection on the intersections of capitalism, conformity, queer culture, and the San Franciscan cityscape. The narrator’s attempts to return Amoeba’s copy of Howl and Other Poems unfold into an exploration of the parallel ways in which AIDS patients and the Vietnam War veterans of Ginsberg’s poetry have been denied both empathy and humanity. The narrator hauntingly reflects on how the opening lines of Ginsberg’s poem “Howl” could just as easily describe his own dying community.

The characters in “Howl” yearn for larger meaning and seemingly find that by looking to Ginsberg—consequently, their understandings of American culture seem to be viewed through the lens of Ginsberg’s writing, with a subsequent 1960s tint that creates an indelible intersection of culture and time. The influence of Ginsberg on Chi Ta-Wei’s own writing style emphasizes the ways in which American influence on Taiwan has expanded beyond the political and into the literary.

While “Howl” explicitly draws attention to the ways that American culture has influenced that of Taiwan, another story in the collection, “Muakai” (2001), offers a different angle on the ways in which literature can be used as a tool of both representation and cultural diplomacy. “Muakai,” written by Dadelavan Ibau, an ethnically Paiwan woman of Taiwanese nationality, is the only story by an Indigenous writer in the collection. (Importantly, Paiwan is just one of Taiwan’s sixteen Indigenous tribes—each with its own unique culture and many with their own language.)

“Muakai” begins within the framework of Paiwanese storytelling tradition. It reads like a folktale being told to a family member, a mix of oddly beautiful but unsettling prose and the jilting familiarity of fart jokes. This folkloric beginning unfolds into a modern, subversive love story, where the title character, a young Paiwanese woman name Muakai, is unable to reconcile her feelings for a female peer with her culture’s demands for a prearranged marriage to a man. In a shockingly direct challenge to Paiwanese heteronormative mythology, Muakai reinterprets her cultural traditions to be more expansive and inclusive, reimagining her goddess ancestor as a fellow lesbian.

The inclusion of “Muakai” in this collection is significant because it not only creates a global platform for an Indigenous voice and uplifts the intersection of Indigenous and LGBTQ+ identity (considered a double minority within Taiwanese society) but also actively explores the cultural differentiations between the majority Han culture and that of Paiwan indigeneity—a reminder that Taiwanese identity is much more complex than international messaging often suggests.

Queer Taiwanese Literature is a collection that demands to be recognized within the context of a national identity—as the foreword acknowledges, though Taiwanese literature owes much to the “ancient traditions of Chinese classical literature,” Taiwanese literature, and consequently Taiwanese identity, reflects something that is ethnically diverse and wholly unique. Queer Taiwanese Literature is a cultural beacon, a signal that Taiwan is not only culturally aligning itself with identifiers of Western culture, democracy, and economically developed nations but, more importantly, that it is proclaiming its unique identity. The narratives, the writing styles, and the identities of both characters and writers are uniquely Taiwanese: an earnest appeal for the many facets of that national identity to finally be seen.