At the Edge of the Woods by Masatsugu Ono 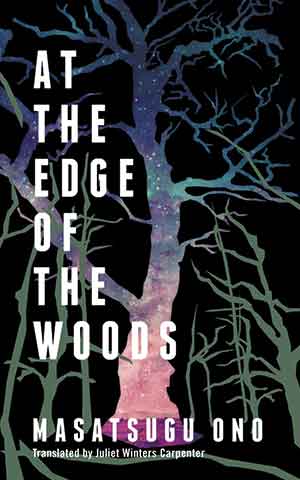 At the Edge of the Woods collects four short stories of unifying characters and themes. While each of these functions as an autonomous tale, they also succeed as episodes of a greater whole, which echo upon one another in surreal tones and the continuity of plot. That plot here is minimal, subsidiary to the atmosphere and symbolism that propel reader emotion and reflection, but Ono ties this meager plot to character and setting to give it inextricable significance as a reflection of the collection’s themes of life amid uncertainty.

A family tries to settle into their new home in an unfamiliar foreign land, in a small rural home bordering a forest. Fearful of another miscarriage, the pregnant mother has departed to return to the familiarity of their former homeland, leaving behind the husband and their young son in the remote unknown. Rather than this providing peaceful quiet and an opportunity for father and son to grow closer, as desired, the isolation of the alien environment and its eerie intrusions upon their life leave them further disoriented. Amid the uncertainty, fearful of how to interpret or react to the inexplicable absurdities that enter their lives, the father struggles to secure stability and security for his son while holding onto the hope of a safe return for his wife and new child.

At the Edge of the Woods is an apocalyptic work, full of signs and visions and unsettling shadows of looming disaster within a family and in the world at large. Strange sounds carry from the depths of the dense forest, as if endorsing local tales of its magical nature, a lair for fantastic beasts and the ghosts of resistance fighters from an age long past who now haunt castle ruins somewhere within the chattering foliage.

In place of carrying letters, their postman arrives with violent tales of imps and catastrophe, told from a mouth filled with razor-sharp teeth that wander about menacingly. Are such imps the source of missing objects around the house? Does the magic of the woods extend to the stump in the yard that defies death? Despite the father’s warnings, the boy is repeatedly drawn into exploring the woods. One day, he comes out holding hands with a half-naked old woman. The father tries to learn what might be wrong with the strange, disheveled woman, but he briefly turns aside and she seemingly vanishes.

Through this, the father awaits calls from his wife, fearful for her travels as the TV airs stories of inundating waters and refugees in the world beyond: hints of a rebelling planet and societal collapses.

Ono’s collection, as translated by Winters Carpenter, succeeds wonderfully in capturing the seep of anxiety, alienation, and fear at the levels of the individual body, the family unit, and society. Yet it also manages to maintain a core of hope and resilience through the drive of the father for keeping his son secure.

Reading the collection briefly and as one unit highlights its opening and closing but lessens the impact of its middle with a growing familiarity with the surreal atmosphere and themes. Readers might better appreciate the entirety by reading each story separately with pauses between to digest each first and then considering the whole.