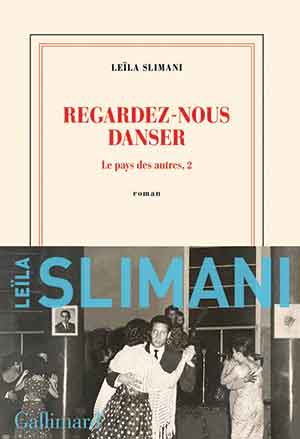 THIS NOVEL IS the second part of a trilogy, Le Pays des autres (see WLT, Autumn 2020, 95), partly based on the author’s family history in Morocco. The first novel spanned the period between the end of the Second World War and the country’s independence in 1956. In Regardez-nous danser (Watch us dance), the central characters, Amine Belhaj and his French wife, Mathilde, have become middle-aged and prosperous, as is indicated by their decision to build a pool near their home—an unheard-of luxury at this time and place. As the owners of a flourishing farm that produces oranges and olives, they are part of the new bourgeoisie of the nearby city of Meknès, which includes native Moroccans and some of the former French colonialists, who are still living in a country that remains rigidly divided along social class lines.

Covering almost two decades after independence, this novel ranges further afield than the first, which was mainly centered on Amine’s efforts to develop his farm and on Mathilde’s attempts at integrating into her husband’s family and society. The number of characters has also increased, to the extent that an explanatory index of the older and newer characters is included as a prefatory section of the book. As was the case in the first book, the narrative threads unfold against the backdrop of broader historical events, this time during the “années de plomb” (years of lead), the long period of brutal political repression carried out to silence any dissent throughout the reign of King Hassan II (Amine’s brother Omar is one of the sinister enforcers of the new political order).

As a family saga, this trilogy follows familiar lines. The two children of Mathilde and Amine grow up and take divergent paths. Their daughter, Aïcha, becomes a brilliant medical student in France before settling down in Morocco with her husband. In a subplot reminiscent of Chanson douce, Slimani’s 2016 novel that won the Goncourt Prize (see WLT, May 2017, 104), the successful couple hires a live-in servant who comes from an impoverished neighborhood. Aïcha’s younger brother, Selim, on the other hand, drops out of school and disappears for several years. In a surprising episode, he intially joins a community of foreign hippies who have found a haven of sorts in Essaouira, a coastal Moroccan city. Selim is last seen in New York, the city he has long dreamed of living in. Meanwhile, Amine, who through constant and painstaking work has managed to turn the family farm into a modern and profitable enterprise, realizes that he will have no successor, that he will be unable to entrust the running of the farm to his children.

Overall, the second part of Slimani’s trilogy does not disappoint, leaving the reader waiting for the conclusion.