The Pages by Hugo Hamilton 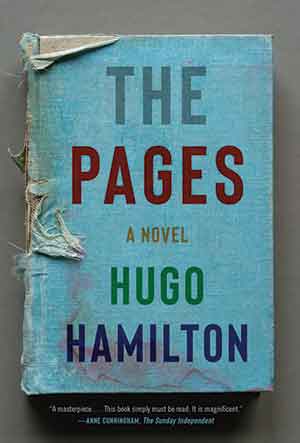 THE PAGES is an inventive and gripping novel that is full of love, loss, intrigue, history, and the enigmatic relationship between books and their readers.

The novel begins in a JFK departure lounge as Lena Knecht is waiting for her flight to Berlin. Tucked inside her carry-on is a copy of Joseph Roth’s 1924 novel Rebellion. But this is a special copy; it speaks to us directly as its own character and acts as sometime chorus for the events as they unfold. A map is drawn on the back pages of Lena’s copy, and we soon find out that the book was given to her by her German immigrant father who instructed her to “Look after this book like a little brother.”

Lena is obsessed with discovering the location on the map, thus uncovering its secret, which might also mean returning the novel to the original owner or the family. She leaves behind a husband whose own life is wrapped up in his career. Soon after arriving in Berlin, Lena loses the book and it is discovered by Armin, a war veteran from Chechnya now living in Germany. Immediately, he becomes obsessed with Roth’s novel. Eventually, Armin tracks down Lena and returns the book, catapulting the two into the role of detectives, each in search of clues to the map and the novel’s owner. What follows is a glorious, fast-paced thriller leading the two toward an end, but not necessarily a conclusion.

The Pages is more complicated than it at first seems. The novel weaves in and out of a contemporary drama and its entanglement with a history that its characters, as well as its readers (both Roth’s and Hamilton’s), cannot escape. In fact, the historical force behind this novel, along with the poststructural preoccupation with the relationship between author, text, and reader, situate this novel firmly in the postmodern moment. Yet The Pages does far more than make use of the postmodern calisthenics of self-reflection and hermeneutics. Instead, the reader is left with a profoundly timely mediation on what it means to live with books and what it means for books to live with their readers. This is itself a part of the gravitational orbit of hermeneutics, but in Hamilton’s hands we are confronted with a hermeneutics from the mind of a writer and not a theorist. This is important and contributes to the success of the novel.

Books, like people, have multiple lives. Every reader brings something new to the text, just as every subsequent reading by the same reader can bring about different interpretations. The history of books and their readers, to say nothing of their authors, is a rich history, but veiled in mystery. A book can sit dormant on a shelf for decades, but as soon as a new reader comes along both the book and the reader are given new life, charged with a special kind of electricity. The Pages is a magical novel that reminds us just how rich the lives of readers can be.