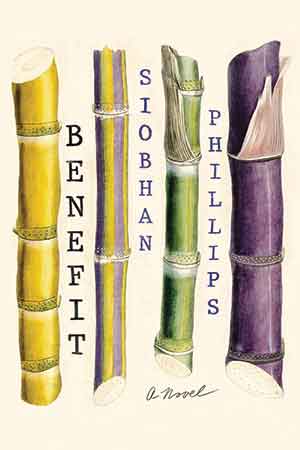 SCHOLARLY RESEARCH INTO the work of Henry James is the literary linchpin that drives the characterization and plot of Benefit, Siobhan Phillips’s telling debut novel of money, power, and friendship. It exposes the hypocrisy of the byzantine inner workings of the reward system of cutthroat academic politics, the fraudulent patina of family-run foundations, and the bitter consequences of toxic relationships.

For ex-adjunct English professor Laura Graham, the subjects are inextricably connected in a binding Gordian knot. Her deep dive into James’s The Golden Bowl (1904) links her to a fellowship at Oxford University funded by Weatherfield Sugar on the backs of slave labor and to seriously flawed romances in a quartet of “students of promise and ambition.”

Laura’s thumbnail summary of the James novel reduces it to a “series of lies” in which “[m]oney drives plots” and “floods virtues.” Its romantic betrayal mirrors the plot of Benefit. Laura strikes up a competitive relationship with beautiful, wealthy Heather, a management consultant; feels as though she has a romantic connection with Mark whose interests are law and global conflict; and admires Justin, a Black journalist who believes Oxford’s PPE (philosophy, politics, and economics) is “outdated, establishment, and colonialist.”

Heather, on the board of the Weatherfield Foundation, offers Laura a research assignment to produce a “commemorative essay” to be distributed at a centennial gala to explain the history of Ennis Weatherfield. That’s when things get complicated.

Laura uncovers the dark secrets behind Weatherfield Sugar. Much of the money that funded the students came from Henry Havemeyer (an actual Sugar King entrepreneur) who “got rich by cutting prices, underselling competition.” In an “atmosphere of growth,” he “forced other companies into bankruptcy and targeted refineries that had overextended.”

Laura surmises that “sugar had done more harm to the world and its people than perhaps any other crop.” European planters began “buying and selling African people to do the dangerous, merciless labor in inhuman conditions” across Barbados, Louisiana, Brazil, Angola, Florida, Australia, Cuba. She begins to think that completing the project for the gala may be immoral.

And no one seems to be who they claim to be. This realization turns Phillips back to James. She references “The Art of Fiction” (1888), where he makes a “distinction between the novel of characterization and the novel of incident.” And then she devotes an entire section of Benefit to pivotal discussions of character and incident.

Laura discovers that Ennis was “too dumb to graduate from Oxford and the Sorbonne and so decided to pay others to do it instead.” She realizes the Weatherfields’ tainted morals are reflected in the lives of the Oxford scholars. She senses betrayal from Heather, political manipulation from Mark, a stab in the back from Justin. Laura writes a scathing denunciation of the Weatherfields and the entire sugar industry. Along with her, Heather, Mark, Justin, and others in the Oxford group begin to understand that it was “a bunch of people who wanted to do some good, and realized they couldn’t, and kept going anyway.”

The crack in James’s golden bowl may be a “clumsy symbol,” but its literary descendant, Benefit, illuminates the same machinations of university stratification, destructive monopolies, and strained friendships.