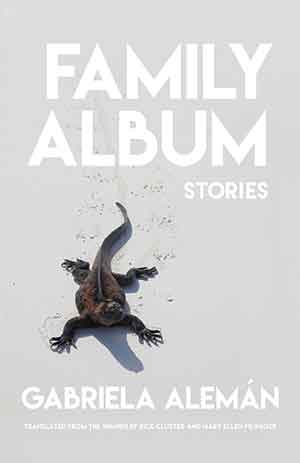 Ranging from eight to fifteen pages, these tales offer an astute portrait of author Gabriela Alemán’s country, called Ecuador for the equator upon which it resides. Settings bounce from the capital of Quito high in the Andean foothills to the volcanic archipelago of the Galápagos Islands—but also a drilling platform near the Louisiana coast, Puerto Rico, a Brooklyn laundromat, Mexico, and the Faena Theater and Hotel in Buenos Aires.

Born in Brazil, Alemán draws on her journalistic experience as she toys with the short-story form. Clever noir blends fact and fiction with an amusing dash of the gothic, resonating César Aira, Carlos Fonseca, Italo Calvino, or Silvia Moreno-Garcia.

“Costume Party” nods to Chilean writer Roberto Bolaño’s 2666 (“The Part about Fate”), exploring movies about masked professional prizefighter El Santo, a symbol of justice in Mexico. The narrator believes there was a double in one film shot in Ecuador, terming the series a “house of cards, fragile.”

A widow spins one of the strongest yarns in “Marriage” as she discovers her recently deceased husband led a double life. Cleaning out his desk in Quito, she sees he had another wife and children in Machala while funneling money for a construction company—and realizes “the hall of mirrors that my life had been.”

Each allegorical tale stands effectively on its own. Yet, dig deeper and therein resides Alemán’s genius, for she embeds recent events such as the Brazilian Odebrecht scandal’s connection to Ecuador or the power dynamics of oil versus Indigenous rights.

She tosses hints all over the place. For example, “Moving Day” seems merely a fascinating tale of demonic possession until one ponders a character’s name and recognizes what a Portuguese word indicates.

Gabriela Alemán’s compelling snapshots may be of Ecuador, but their relatives certainly appear in many family albums around the globe. The book is a work of art.