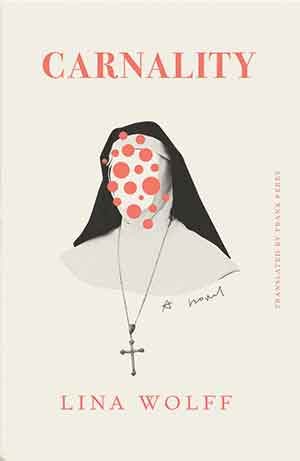 LUCIA IS AN elderly nun who has co-created—“birthed,” perhaps, is a better word—Carnality, a bizarre talk show on the Dark Web. It is ostensibly about helping its guests but specializes in destroying people’s lives for the entertainment of their dedicated and anonymous viewers. Toward the end of Lina Wolff’s latest novel, which shares its name with Lucia’s show, Lucia muses about the human soul. She thinks there is an inner essence, a true self inside people, that she can see—though the essence of some people is harder to assess than others, despite Lucia’s lifetime of experience. She likens the process of understanding such people to trying to catch an eel in a well, “as if you had to decode them, decipher them, grab hold of their inner lives when they least expect and yank them up to the surface to examine them in the light of day.”

But what if what you bring forth destroys others? What if this destruction is your salvation?

These questions play out throughout Wolff’s deftly plotted novel, starting with the protagonist of the first section, Bennedith, a Swedish writer visiting Madrid on a travel grant during the blistering heat of summer. She’s in the grips of a midlife crisis further fed by twenty-year-old memories of her younger self partying in Madrid. Now, she considers herself a “veritable El Dorado of failures.” Wolff doesn’t reveal many specifics about these failures. Instead, she drops us into Bennedith’s life as she’s flailing about for connection and meaning. Can Spain and the people she meets there, the people she collides with, help her find it, help her find herself, bring forth that long-stifled self?

There are many such collisions in Carnality, violent, comic, or both. The first is Mercuro, a male chauvinist and serial philanderer whom she happens upon in a bar. He seems exhausted and hounded by something. Many of the subsequent characters feel similarly hounded: by their history, their past behavior, past betrayals, by fascism, the patriarchy, male violence, childhood trauma, or visions of God. While Wolff in a recent interview in Asymptote stated she creates characters without pasts because she likes “the idea of the character who is not overly determined by factors from his or her childhood,” her characters do have complicated pasts, though perhaps they aren’t overly determined by them. The long shadow of Franco’s dictatorship looms over both Mercuro’s and Lucia’s lives. More recent actions, many of them violent, occur in the novel—are committed by characters or inflicted upon them—that then become the recent past, become histories that shape characters’ later choices and actions, sometimes with fatal results.

Will Bennedith find what is within her? Will bringing forth this essence help her fill the hole in her life? Will Mercuro escape what is hounding him? What does Lucia desire, and how do Carnality and Bennedith factor in?

By the end of Carnality, Wolff answers these questions by yanking her characters’ souls, like so many elusive eels, to the surface. Whether what is brought forth leads to their destruction, salvation, or both is up to readers to decide.