When She Became You / Songs to Suzanne by Michael Jennings 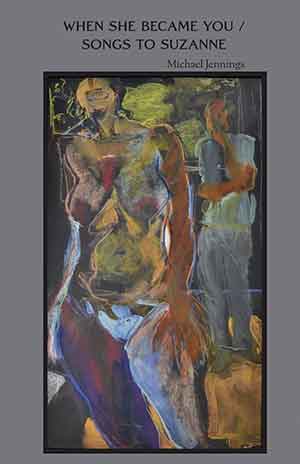 MICHAEL JENNINGS’S FIFTEENTH collection of poems is a lyrical triumph. His satisfying lines sing with memory, endured longing, and an imperfect sense of self, striving to make sense of mortality. His themes are timeless—mortality, the passing of time, love sought, lost, remembered, and relived, as well as others—but they resound with a freshly felt sense of grief, balanced by a reverential insouciance. Functioning as prologue, an untitled poem introduces the collection with a moving sense of loss: “The past was terrible. I sat beside myself / near the river of bones.” From this cryptic vision, the book moves through a captivating collection of memory, both for its beauty in the midst of pain and also a mythical sense of honesty that reduces the speaker (and reader?) to a vital, yet fleeting, essence of existence.

Jennings’s writing presents an embodied dialogue: a conversation experienced between speaker, Muse, or personae as presented, a river (or other elements), poet and reader. Though in some sense, all fine poetry accomplishes this dynamic on some level, in this work Jennings makes it immediate and profound. His title, When She Became You, foregrounds the phenomenon of becoming what/who we love while also implying that we transform those with whom we associate. Perhaps the more intimate, the more transformative? Some examples: “Once she was tree trembling in moonlight. / Once she was river / tied down by her hair”; “Your body is also a river with wings”; “Perhaps you are snow. . . . She is gossiping by the well / and you are the strewn fieldstones, / lidless eyes of the desert / waiting for rain.”

The poet’s use of language attempts to take us beyond expression into the depths of feeling. A primary, general theme of love becomes all-encompassing, for speaker and reader. It is not presented as simply an individual quest but rather an upgathering of life itself: meaningful, wretchedly beautiful, haunting, yet gloriously depicted in memory. Jennings also tosses in occasional innovative, ironic twists, such as “I wake in the half-light, / sinless as a June bug, pure as Narcissus.”

Jennings’s use of image and choice of language causes the passing of time, linked to the seasons, to flow in easy, breathlike movements, almost unnoticed, except for their pleasing, mesmerizing effect. Yet the certainty is also fully realized, and the grief is profound, despite the beauty that accompanies its depiction.