By Fire: Writings on the Arab Spring by Tahar Ben Jelloun 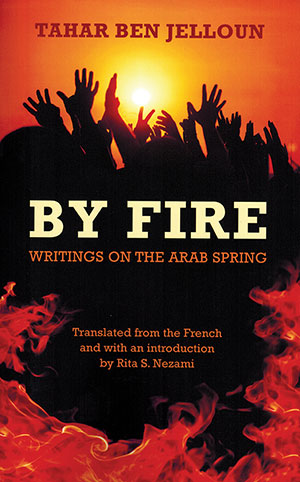 Where does one begin to speak of the Arab Spring, after all that has been expended in dreams, analysis, and lives? In By Fire, Tahar Ben Jelloun, Moroccan intellectual and one of the most acclaimed novelists writing in French today, attempts to creatively rescue from the ashes Mohamed Bouazizi, the self-immolating fruit vendor credited with igniting the Tunisian revolt.

This slim novella, the first fictional account to tackle the subject, was initially published in 2011 at the height of the protests. Gracefully translated, with an illuminating and exhaustive introduction, by Rita S. Nezami, By Fire is a work of imaginative empathy and real compassion. Upon reading the work of fiction in one sitting, Nezami spontaneously combusted into translation: “There are urgent stories out there that need to be told in as many languages as possible and made available to world readers.”

Ben Jelloun, for his part, trusts in the power of literature to enflesh a symbol, lend voice to silent masses, and get to the heart of a human drama more powerfully than any news report might. “I focused on Mohamed’s story,” he says in an interview. “I closed my eyes, I saw it, and I wrote it. Beyond the specific situation in Tunisia, Mohamed Bouazizi became a valuable symbol for all cultures and all countries in pursuit of dignity.”

Also collected in this slender volume are Ben Jelloun’s nonfiction accounts of the political backstory, The Spark. Here, he categorically condemns dictatorship and police brutality in Tunisia and throughout the Arab world, contrasting their cruelty and corruption to the living poem of an oppressed people rising up in peaceful resistance (specifically, in Tunisia and Egypt).

All first-rate poetry is occupied with morality, according to T. S. Eliot; and By Fire, in its quietly lyrical way, is above all a moral book. Reading it is meant to prick our conscience and disturb us, as we consider the pitiable conditions and institutionalized injustice that push a human being to use his body as a last site of protest, to die in order to be heard. Together, the nonfiction and fiction sections complement one another in telling the humiliating life story of our desperate protagonist, from the inside and out, with plainspoken and urgent prose. “Despair is betrayal” was one of the slogans of the Egyptian Revolution, urging people not to lose hope in change. In that sense, this is not a despairing work but a reminder of what was once possible and what is still at stake if—through ignorance, apathy, or worse—we look the other way when confronted with the suffering of millions of innocent others.