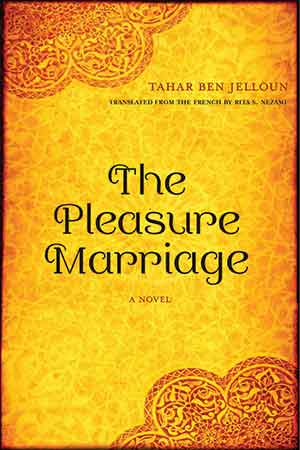 BENEATH ITS BUSTLING marketplace and wondrous architecture, Fez, Morocco, is no less susceptible to hatred. Tahar Ben Jelloun’s generational saga, The Pleasure Marriage, traces the consequences of the dream of two lovers against the prejudice of reality. Amir, a successful and white merchant, graduates a temporary union—the novel’s namesake—in Senegal between himself and Nabou, into a second marriage. After a surreal journey across the desert with Nabou and Amir’s son, Karim, fantasy and passion is ensnared by intolerance and racism. Ben Jelloun’s tale possesses the voice of a fairy tale yet never relents in examining Nabou and ultimately her children’s plight.

Amir and Nabou’s story is framed à la One Thousand and One Nights; appropriately, an excerpt of the classic text prefaces the novel. A renowned, begging storyteller introduces the narrative with a tinge of whimsy and curiosity, despite its severity. Though the early movement of The Pleasure Marriage feels magical and even timeless, Ben Jelloun’s voice does not inappropriately stifle the injustice that later transpires.

Passion is ample throughout the novel even when tempered by the flames of scrutiny. Ben Jelloun is careful to illustrate every consequence of Amir and Nabou’s relationship. In doing so, however, some seemingly key events in the novel pass quickly and without much contemplation. The novel’s pace is thus jarring at times: whereas one character’s sleepless night encapsulates the bulk of a chapter, another’s death may only warrant a few paragraphs.

In many ways, Ben Jelloun crafts a modern myth for Morocco. It can be difficult not to get lost in passages detailing the depths of Fez’s economy, but the crossroads of commerce is likewise where ignorance converges. As the text shifts focus to Amir and Nabou’s children, the impact of racism grows stronger. This spurs a juxtaposition embodied with the couple’s twins, Hassan and Hussein, whose differing skin color yields notably different experiences. With his clarity intact, Ben Jelloun’s gaze into tragedy is unblinking.

Nabou’s characterization is powerful, but she is undoubtedly the most prominent of very few feminine voices. While Ben Jelloun still includes moments of maternal concern, especially in the instance Nabou realizes one of her children will become victim to the same intolerance she faces, much of this perspective feels truncated.

The Pleasure Marriage is still as accessible as it is insightful, even if certain moments feel somewhat glossed over or otherwise rushed. There is a unique beauty to Ben Jelloun’s storytelling, with its folktale allure effortlessly woven into a succinct, modern commentary.