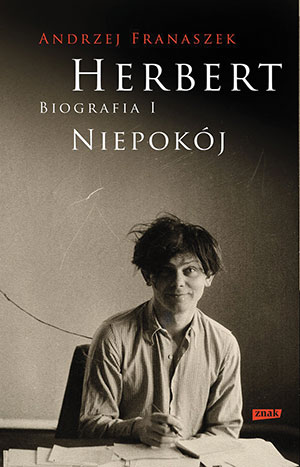 Andrzej Franaszek once again undertook a gigantic task when, after his successful biography of Nobel Prize–winning Polish author Czesław Miłosz (2011, English translation 2016), he decided to write a comprehensive biography of another outstanding Polish poet, Zbigniew Herbert (1924–1998). In the case of the latter, Franaszek had at his disposal a wealth of unpublished material: Herbert’s diaries and notes, letters from friends and translators, correspondence with women close to the poet, as well as many eyewitness accounts of his poetry readings and opinions from different periods. Paradoxically, Zbigniew Herbert, first a silent, later increasingly a vocal opponent of the Communist regime in his country, reached fame sooner outside Poland, provoked controversy after his final return to his homeland, while his memory was kept alive twenty years after his death by the Republic of Poland declaring 2018 a Memorial Year of Zbigniew Herbert.

Franaszek divides his material into seven long chapters across two volumes and within his chronological approach finds room for subchapters focusing on particular themes. This works reasonably well, though it leads to minor repetitions. While following the biographical thread, Herbert appears in at least four distinct roles: as a private person, a talented poet, a budding dramatist, and a cultural essayist with an excellent eye for the fine arts.

It is as an essayist that Herbert scored his first international success: Barbarian in the Garden (Babarzyńca w ogrodzie, 1962), a collection translated into several European languages, was proof of the poet’s profound interest in the beginnings of European culture (Lascaux) as well as Greek and Italian art, not omitting the consequences of such antiheretical “internal Crusades” as the war that ended with the extinction of the Cathars. While writing this book, Herbert spent more time in Paris and London than in Poland, finding new friends and supporters in western Europe and the United States: the critic Al Alvarez in London, his translators Karl Dedecius and Klaus Staemmler in Germany, and the most loyal American Polish couple, John and Bogdana Carpenter in America.

This comprehensive biography will also satisfy readers curious about Herbert’s private life, providing information on his international romances as well as long-standing emotional attachments. As for the latter, here two women seem to dominate: Halina Misiołek, a married woman whom Herbert met in 1950, and the aristocratic Katarzyna (“Kasia”) Dzieduszycka, his wife from March 1968 to his death thirty years later. The correspondences with and reminiscences of both are essential to understanding the twists and turns of Herbert’s colorful life, spiced from time to time by romances with a French woman, an Austrian actress (both older than the poet), and a young German admirer. Equally important are Herbert’s friendships with (usually older) writers and critics such as Jerzy Zawieyski, Jerzy Turowicz, and Leopold Tyrmand, an exception to the rule being the close friend, six-years younger Zdzisław Najder, whom Franaszek nevertheless describes as playing the role of “a benign uncle,” and a special place is allotted to his acknowledged master and first English translator, Czesław Miłosz.

Franaszek is right to devote much space to the discussion of Herbert’s rather complicated, tortuous relationship with the Nobel Prize–winning Miłosz. Both were born outside present-day Poland: Miłosz in Lithuania and Herbert in Lwów (present-day Lviv in Ukraine) but had very different experiences in World War II and after. Franaszek refutes the self-enhanced legend that the young Herbert played an active part in the nationalist Home Army while also indicating Miłosz’s ambiguous view of the Warsaw Uprising in 1944, which decimated an entire generation of young Poles. Their quarrel in California took place in 1968, a difficult year in Herbert’s life—a year earlier he had his first attack of emphysema, which led to his frequent hospitalization in the following years, and he also had a serious drinking problem.

It was in this context, with the worsening political situation in Poland, that the two poets clashed over a drink when Miłosz’s Polish-Lithuanian skepticism was pitted against Herbert’s chivalrous-Romantic vision of Polishness. Though toward the end of Herbert’s life a phone call from Miłosz led to a reconciliation, it is worth quoting what the older poet said about Herbert, duly repeated by Franaszek: “How he hated me. But also loved. This often happens—this combination.” Fairness toward strong competitors is rarely characteristic of great poets.

The last chapters of this biography make sad reading. The change of regime in Poland in 1990 coincided with a minor mental breakdown for Herbert: he quarreled with almost all his friends, including his loyal and often generous translators. Later he tried to make up for his behavior, but the scars remained, and in the last four years of his life the ailing Herbert condemned himself to loneliness in his small Warsaw flat. He also wrote some remorseful religious poems during this period, but he will probably be most remembered for his earlier work, particularly for the poems of the Mr. Cogito cycle.

Andrzej Franaszek’s biography of Herbert is illustrated by numerous photos and complemented by a year-by-year “Calendar Timeline of Zbigniew Herbert’s Life,” which this reviewer found particularly useful when occasionally lost in the minutiae of a life full of travel, love, literary success, political controversy, and personal suffering.