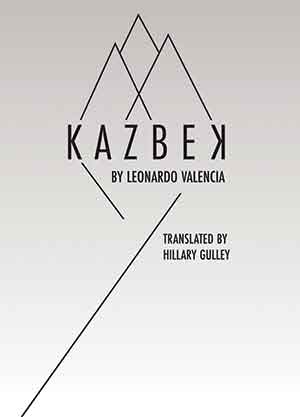 IT IS COMMON for Latin American writers to be introduced to readers of other languages with a short novel not fully reflective of their complexity (e.g., Bolaño). Kazbek was first published in Spain in 2008; afterward in Argentina, then in Leonardo Valencia’s native Ecuador. Such untimeliness stimulates misperceptions among literary historians or leaves more intricate masterpieces underappreciated but is very enlightening for broader audiences who read translated literature. Hillary Gulley’s pointillist rendition, attention to turns of phrase, and subtle versions of Valencia’s allusions make for a masterful peer of the original. Kazbek, ambitious in its conciseness and ample in its philosophy of composition, is a companion poetics to Valencia’s La escalera de Bramante.

That practice’s impact derives from his poised management of ideas about form in narrative and pictorial art. It is not that his narration hardly shows anxiety in its construction; rather, the aesthetic doubts articulated make readers sympathetic to the endeavors played out in Kazbek, both the character and the novel. Upstaging the wearisome angst of many contemporary novels’ protagonists, Kazbek wants to know how or why he is trapped in a real life that hasn’t let him write a novel. That problem is plausible because his unlived life is not neatly planned, and Valencia seems to be reimagining a real life along Nabokovian lines.

A storyteller with a painter’s eye, for Valencia the genre’s precariousness is its strength and source of meaning. Since his novel cannot be a painting, the attendant indecision is part of his poetics. Apprehensive about rereading, Valencia is cognizant that a novel is read at whatever rhythm readers want. But his is not a cerebral striving to disarm the mimetic contract they establish with novels, or a trite metafictional gimmick (he knows spontaneity is premeditated by existing linguistic matrixes), but rather a means to generate conceptual realizations by exploring the genre’s insufficiencies and power. Within that reconnoitering, the characters’ wavering is not an embellishment but a choice that allows them to live as they want.

The narrative trigger is the first part, when the nomadic Mr. Peer hands Kazbek sixteen puzzling drawings inspired by an eruption in Ecuador’s Pichincha volcano, asking him to create a “Small Format Book, in which each drawing would be accompanied by a text” that could be turned “into something more than a commentary on the drawings.” That counsel spurs mapping artistic obsessions while going back to Barcelona from Guayaquil, aware that indulging in a master’s musings imprisons him. The fifth part conflates pictorial art and writing (Peer’s sententious advice never leaves Kazbek, yet theirs is more an interaction of talents than a master/disciple relationship). Peer approves those texts focused on the insects’ corporeality and Kazbek’s need of support from Isa, an enigmatic sort of editor.

More than calibrating what is a book or a novel, what consumes Kazbek from the last pages of the second part until the end is whether or how to write Dacal’s story. His presence in Kazbek and in Valencia’s other fiction is pursuant to his views on “intangible” novels and “progressive fiction,” upon which he expounds theoretically in his nonfiction and in practice in his narrative. For Dacal “he won’t write a short story. It will be a Great Novel,” like his “temple of fiction,” the Western canon from Don Quixote and Tristram Shandy to Horcynus Orca and The Unconsoled, “all thick novels.” Size is not the sole criterion since Juan Rulfo’s succinct masterpiece Pedro Páramo is “an exception to the tomes and [his] own opinion.”

If part 3 is an art forum between Peer and Kazbek, in which the former suggests “you should keep in mind this triple encounter: reader, writer and illustrator,” the fourth is a visual rationale for the fifth. In both parts Dacal’s presence is inescapable, although the fourth emphasizes Kazbek’s indecision, because “[h]e feels as if he has read a novel in fragments and been left to fill in the gaps,” and on the way home “he proclaims the titles of the books he will rescue: all will be Small Format Books.” The Great Novel is a Great Sketch.

Not a contemporary forerunner to short metafiction and autofiction like Gide’s Paludes (1895) was, particularly in terms of the high-register speech that Gulley translates impeccably and the plot’s detachment from mockery, Kazbek’s discourse is a revisionist caveat to the remaining practitioners that a constantly updated and copious practice ought to seek deftness. It is also about building progressive knowledge and leaving fuller meaning up to readers at a time when it is easier to find penitent writers and artists than real literary or painterly apostates.