Echo on the Bay by Masatsugu Ono 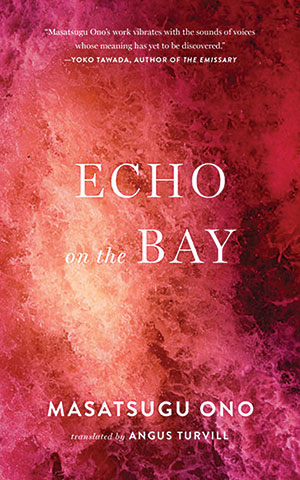 IN ECHO ON THE BAY, Masatsugu Ono drops readers into the middle of a small fishing village on the southern Japanese island of Kyushu, a rather sleepy place on the face of it. Miki, the daughter of the village’s new police officer and the narrator of the book, is new to the village, having only recently moved with her family. Her unfamiliarity mirrors that of the book’s readers, making for a very natural untangling of the village’s complex history of feuds that go back decades and open secrets, which elicit chatter that always falls just out of earshot.

Much of the book takes place inside Miki’s home, with a few villagers recounting histories that are ostensibly known to everyone in the village but only talked about with doors closed and alcohol greasing the gears of memory. Their stories amble and stutter, wandering from person to person and event to event in pathways whose connections only make sense to the people who have tread them countless times. All these individual stories weave together into a singular narrative of a people tightly bound together throughout generations.

Every story told to Miki occurred long before she arrived, but time moves differently in a small town, and long collective memories lend the events of the past an inertia that keeps them a constant presence in the present. The past is an imminent presence hanging over everything: lingering regrets, abuse handed down from one generation to the next, and traumas that beget more cruelty. In fact, the past even takes corporeal form at one point, when a small fishing boat thought to be lost for years suddenly reappears along the coast of the village.

While the book spends most of its time untangling these pasts and situating them in relation to the present, it also quietly interrogates the future of a place like this where many things seem to never change. The younger characters, with the history laid out before them, have the chance to decide for themselves how they will let this past define them or not.

Ono shines in these descriptions of small-town Japan—his familiarity with the terrain, people, and pace of life is evident. In many of Ono’s stories, these villages seem to hold some sort of fantastical element—small moments and phenomena that don’t have a clear explanation. Echo on the Bay follows this trend as well; it’s infused with a small, subtle magic that comes from the close intimacy that can only be found in these kinds of villages, making it a moving portrait of a place and people often overlooked.