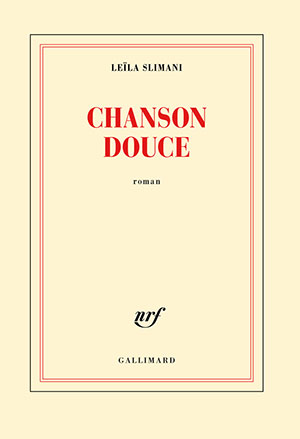 The novel that won the prestigious Goncourt Prize in 2016 begins on a grim note: “The baby is dead.” Most of the ensuing narrative is recounted in the form of an extended flashback, with occasional tangents devoted to minor characters. The grimness of the opening section is quickly relieved by relatively bland descriptive passages about a typical French middle-class couple, Myriam and Paul, who are trying to balance the pressures and time constraints of their respective careers while raising their two young children. They decide to hire a nanny and quickly choose the middle-aged and recently widowed Louise who, despite being estranged from her own daughter, has an uncanny ability to interact with children.

While Myriam and Paul are busy at work, Louise not only takes up most of the activities linked to raising their children but also starts to manage their household, rearranging and cleaning their apartment, taking care of the shopping and cooking, etc. Myriam and Paul are delighted: Louise is not only able to soothe their children and make them behave; she also relieves the couple of most of the burden of household chores. Louise, who seems to have no life of her own, becomes an essential part of the family, even accompanying them during their summer vacation. However, she never really loses her status as an unknown outsider.

While Louise remains active and essential to the functioning of the family unit, she seems to be invisible, to have no desires or needs of her own. In this sense, the class distinction between the upwardly mobile family and the impoverished servant comes to resemble a form of colonial subjection. In terms of narrative suspense, there is a Hitchcockian pattern of mounting tension set against an apparently placid background, as Myriam and Paul progressively realize that Louise is not just carrying out their instructions but also making her own decisions that negatively impact the children.

At one level, Leila Slimani’s novel could be read as a sententious morality tale, faulting Myriam, especially, for privileging her career and thereby renouncing her responsibilities as a mother. But this is only one possible interpretation of Slimani’s tightly constructed and often-enigmatic narrative. Born in Rabat, Morocco, in 1981, Slimani moved to France when she was seventeen and later worked as a journalist. Since this is only her second novel (Dans le jardin de l’ogre was published in 2014), Chanson douce announces the emergence of a young and very promising author.