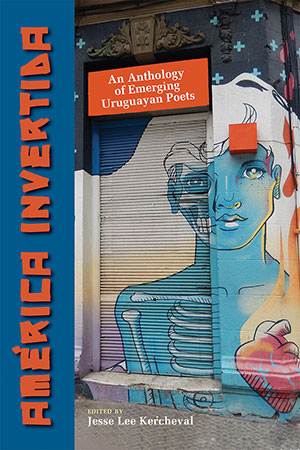 América Invertida owes its name to the well-known 1943 drawing in which vanguard painter Joaquín Torres García turned the map of the Americas upside down. It was not a joke but rather a testament to his anticolonial conception, which he summarized in the phrase “our North is the South.” This is the fourth bilingual anthology of Uruguayan poetry published in the US since 2010. This volume is differentiated from the others by the fact that these young “emerging” poets were all born between 1976 and 1989.

The text selection and the designation of its respective translators belong to Jesse Lee Kercheval, American poet and translator. Her enthusiasm for Uruguayan culture led her to a months-long stay in the country, during which she read books and manuscripts from more than sixty authors. Kercheval made an outstanding job out of an arduous task; considering the amount of poetry produced in the country, many other names could have been included to no detriment of the quality of the results.

The project accomplishes important goals. First, it speaks for the current vitality of the prestigious Uruguayan poetic tradition, deserving of a greater global acknowledgment. Second, the pairing of one poet with one translator resulted in fruitful bonds. In fact, ten US periodical publications published advances of the anthology, two publishing houses published the full books of Victoria Estol and Karen Wild, and two others are waiting for their turn in 2017.

Among the many styles and means present in the book, worthy of note are the metonymic plasticity of Barea Mattos, the metapoetic synthesis of Martín Cerisola, the tight yet dense verses of Paola Gallo, the parricidal irreverence of Hoski, the social tearing of Fabián Severo’s Portuñol (the dialect of the Uruguayan-Brazilian frontier), the portraits of the “music of indigence” of Paula Simonetti, the ironic “surplus of misery” of Javier Etchevarren.

In future editions, two corrections should be made in the introduction: the number of poets is twenty-two, not twenty-three; they were all born after 1975, not before. I also missed the absence of information regarding the publication of the poems: what book they belong to and whether they are unpublished. Regardless, Kercheval has drawn a sound bridge for poetry to travel from south to north.