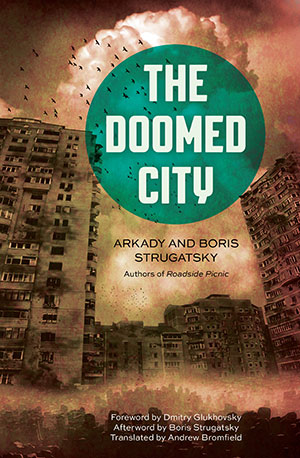 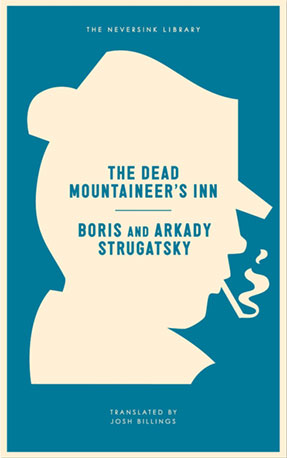 A Soviet astronomer from the 1950s. A Nazi. An American professor from the 1960s. These and about a million others from different countries and different times have been somehow transported to the City, a wholly artificial world that strongly resembles Earth . . . except for hordes of baboons that occasionally rampage through the streets, a building that materializes at random locations, and other oddities.

New residents are assigned jobs quite different from those they held on Earth—when we meet former astronomer Andrei Voronin, he is a garbage collector. But in the City, jobs are ephemeral: at any moment, anyone can be assigned a different job. In the second chapter, Andrei is an investigator in the public prosecutor’s office; in the third, senior editor of the City Gazette.

Andrei is a thoughtful, decent man: he tries to be just, to do what he can to “put things right.” But he is so indoctrinated into the reigning ideology that he’s unaware of its soul-destroying meaninglessness. Until he embarks on “the great expedition to the north.”

As counselor to the president, Andrei leads a handful of soldiers and a gaggle of functionaries into the unknown to find “the beginning of the world.” Although ravaged by disease and deprivation and gripped by existential despair, Andrei forges ever deeper into the wasteland, a lifeless desert dotted with ruins of ancient cities. This desolate landscape externalizes the ideological void within Andrei’s mind, and his increasingly desperate trek incarnates his spiritual quest for meaning, for a reason to go on living in spite of what he has learned about the destructiveness of humankind and the futility of all he has tried to accomplish.

Upon completing The Doomed City in 1972, the Strugatskys believed its social criticism and philosophical content rendered it unpublishable. When finally published in Russian in 1989, it rapidly gained a reputation as their magnum opus and a masterwork of the philosophical tradition in Russian literature. Now, twenty-eight years later, we have this splendid English translation, and it astonishes.

After the dystopian darkness of The Doomed City, The Dead Mountaineer’s Inn seems radiant. Unique among the Strugatskys’ works, this novella is a jeu d’esprit. Its subtitle, “One More Last Rite for the Detective Genre,” echoes that of Friedrich Dürrenmatt’s The Pledge (1958). But while Dürrenmatt sought to deconstruct the detective story into oblivion, the Strugatskys are playing with the genre. Beginning as a classic locked-room murder mystery, the novel morphs into a tale of the supernatural (maybe), then into a gangster thriller, and finally into something deeply strange.

Red herrings and MacGuffins abound; parody, absurdism, and surrealism run riot. But the Strugatskys never lose control; they even interweave philosophical themes about identity. Though comparatively inconsequential, The Dead Mountaineer’s Inn is as much a tour de force as The Doomed City, and it’s great fun to read.

Get The Doomed City or The Dead Mountaineer's Inn on Amazon or add either one to your Goodreads reading list.