Greetings from Grandpa by Jack Mapanje 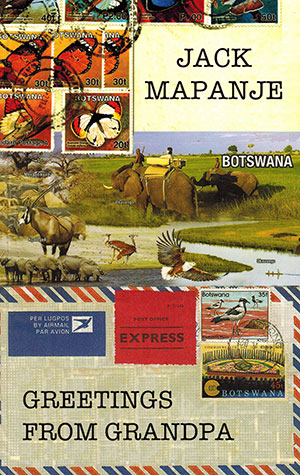 Widely recognized as Malawi’s most celebrated poet, Jack Mapanje belongs to the generation of Africa’s renowned writers imprisoned for decrying corruption and human rights abuse. His first volume of poetry, Of Chameleons and Gods (1981), which deftly employed symbolism to ridicule the rulers of Malawi, helped introduce to the world the activist voice and artistic commitment associated with his poetry. Frequently cited alongside Dennis Brutus, Wole Soyinka, Nelson Mandela, and Ngũgĩ wa Thiong’o in scholarly books addressing Africa’s imprisoned authors, Mapanje owes much of his inspiration to the oral tradition. The poet employs a persona that forages time to articulate the political context of his homeland and the irresoluteness of exile. In Greetings from Grandpa, his sixth collection of poetry, Mapanje demonstrates versatile techniques as he straddles circumstances at home and in exile, intriguing his reader with narratives examining family ties, friendships ended by AIDS, and economic woes affecting his country, including the endless bane of corruption that continues to plunge deeper into Africa’s succeeding ruling classes.

As in the case of his other poetry collections and narratives, the vibrancy of Mapanje’s verse is aided by his knack for truth-telling. Many of the poems evoke sadness but stir in the reader a participatory reaction to either grieve or comprehend the experience captured. Poems such as “Imagining Home,” “The Carwash, Clifton Moor, York,” and “Surviving Freedom in Sunderland” use vignettes to articulate the losses and the victories of exile. Like many others, these poems dramatize familial experiences and push forward the poet’s role as a chronicler of family, global, local, political, and social history. Put simply, Mapanje has assembled in this book poetic narratives endowed with the dreams, hopes, and struggles of his generation, his children’s generation, and the promising generation of his grandchildren.

The images and imagery evoked help in approximating Mapanje’s status as an imbongi or praise singer of his people’s oral tradition. Tacitly crafted, these are poems working within the imaginative space of a seasoned voice. For those from the Yao-speaking African peoples of Malawi, Tanzania, and Mozambique, the last part of the collection, subtitled “Kalikalanje of the Ostrich Forest,” is the most moving and informative. Here, the poet’s investment in the oral resources of his homeland is enhanced by the fascinating tales traced to the character Kalikalanje, a reference to “anyone who comes into the world endowed with knowledge of past, present, future times and events.” Indeed these stories, cleverly resurrected in poetry, transcend time and illustrate the poet’s anchored footing in the culture of his people.

With Greetings from Grandpa, Jack Mapanje reinserts his voice as a legend in the arena of contemporary Malawi and modern African poetry. His vision, without question, espouses the features and values of poetry that African poets writing today should emulate. Much as he has traveled the world and lived in exile, he continues to produce poetry that embodies continuity and commitment to ideals that uplift the human spirit, celebrate the orature of his people, and question the political context of his homeland.